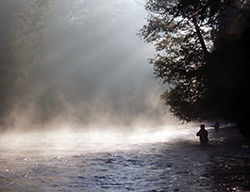 The original native fish in the river was the grayling but in the deforestation that happened after the Great Chicago Fire, the grayling disappeared from the stream. Rainbow trout were first added to the river in 1876. Then in 1884, the imported German brown trout was first released in North America on the Baldwin River, a major tributary of the Pere Marquette.

The mainstream begins at the confluence of the Little South Branch and Middle Branch (The forks) south of Baldwin and continues until the river empties into Pere Marquette Lake, near the city of Ludington. The National Scenic River designation applies to that section of the mainstream between The Forks and Highway 31 south of Scottville.

From M-37 to Gleason's Landing, fishing in the river is catch-and-release, flies only. From Memorial Day Weekend through Labor Day Weekend every watercraft on the river needs a permit. Camping within Huron-Manistee National Forest along the river corridor is allowed only at designated camping areas. Camping areas range from developed campgrounds to primitive sites to canoe-in only sites. All camping requires payment of the fees instituted under the Recreation Enhancement Act. So does all use of Forest Service river access points and parking areas. The Forest Service does keep all parking areas along the river plowed so winter access is no big deal.

Within the National Forest the river is segregated into three sections for administrative and watercraft-control purposes. Those three sections: The Forks to Bowman Bridge, Bowman Bridge to Upper Branch Bridge and Upper Branch Bridge to Walhalla Bridge. The number of watercraft permits allowed varies by day of week and section of river with permits being divided between the public and two permitted liveries along the river. 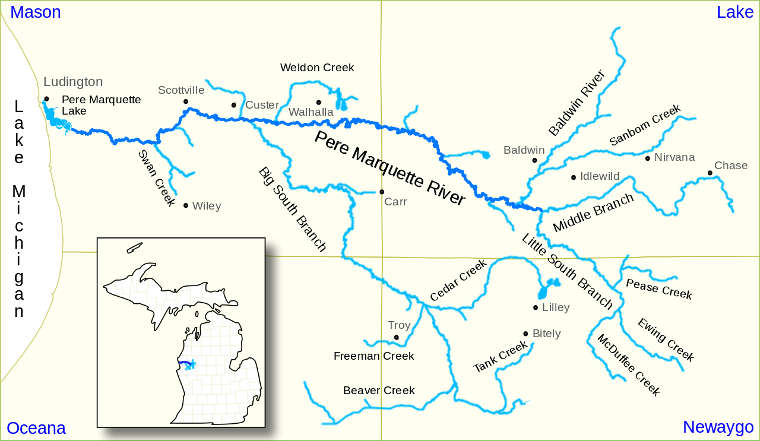