Along the Tobin Harbor Trail at Isle Royale National Park 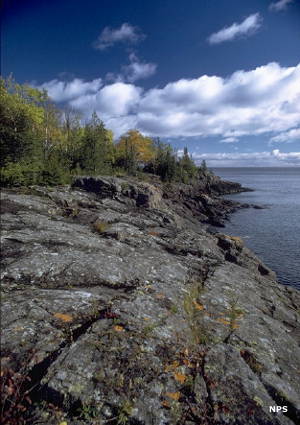 Isle Royale National Park is a 571,790-acre property in Lake Superior. About 1/4 of the park is above water, the rest being in the waters that surround the main island and about 400 smaller islands in close proximity. Isle Royale itself is about 45 miles long and up to 9 miles wide in places. The area is famous for its harsh weather and dramatic underwater topography. Centered as the island is in the main shipping lanes of Lake Superior the island is surrounded with well-preserved shipwrecks. The forest was pretty much clear cut in the early 1900's but the temperate broadleaf and mixed forest has recovered nicely in many areas. It helped that the island became a National Park in the 1930's and virtually all commercial activity on the property ceased. There is still some commercial fishing offshore and there are twelve life-estate leases on the island, all held by families descended from early settlers on the island.

The island and the nearby Keneesaw Peninsula area show signs of ancient copper mining. Artifacts found in the area were dated with carbon-14 methods to be at least 5,700 years old. Some of the mine pits and trenches are up to 20 feet deep. A report submitted to the State of Michigan in the 1840's set off a copper mining rush when it revealed the locations and extent of ancient copper mining in the area. However, there were no fortunes to be made with copper in the area as the deposits were small and quickly played out. However, many artifacts from those days and before still litter the island and the nearby peninsula. 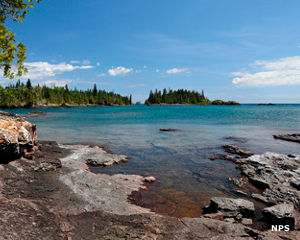 In the Hill Islands

The island is composed mostly of a series of northeast-to-southwest trending ridges that rise from the ground at an angle, north sides tending to be steeper than south sides. The central ridge on the island is Greenstone Ridge, rising to more than 1,000 feet above the water line in several places. The rock is composed of sandstone, conglomerate and basalt atop the 1.1 billion year old Mid-Continent Rift.

The island is only accessible by seaplane, ferry or private boat. The park is open every year from April 16 through October 31. That includes the main island and everything within a 4.5 -mile distance of it. The rest of the year the park is closed to protect visitors from trying to experience the extreme weather conditions.