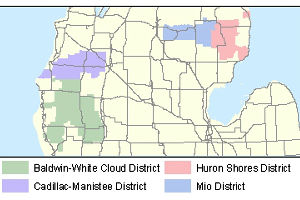 The two forests were formed on land that had been heavily logged between 1880 and 1930. Taking the land into the protective hands of the US Forest Service allowed second-growth in the forests, a second-growth of trees somewhat different from what was before (more hardwoods and less conifers). It also allowed the rivers and streams to recover from the slash-caused fires and the effects of heavy erosion. However, the grayling has been almost eradicated from the area and the streams are now populated with rainbow trout, German brown trout, salmon and steelheads.

There are about 330 miles of hiking trails on Huron-Manistee National Forest. The most busy trail is probably the North Country National Scenic Trail, which crosses Manistee National Forest in a generally north/south direction. Along the 127 miles of NCNST in the forest are 15 spur trails to other hiking and interpretive trails. The route of the NCNST is marked with rectangular blue blazes. Connector trails are marked with white rectangular blazes. Here's a map.

In total, Huron-Manistee National Forest offers about 1,800 miles of rivers and streams plus about 17,000 acres of lakes and ponds. There are boat launch sites on most of the rivers and lakes but some areas are walk-in only. Some of the Forest Service campgrounds also offer direct access to swim beaches. Use of any Forest Service-developed areas incurs payment of the Recreation Enhancement Act fees for that area.