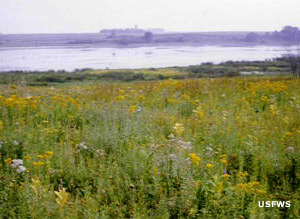 Union Slough National Wildlife Refuge is a 3,334-acre property centered around what remains of pre-glacial riverbed at the junction of two watersheds: the East Fork of the Des Moines River and the Blue Earth River of Minnesota. The terrain is essentially flat and water flow is sometimes determined by the direction (and strength) of the wind. Native Americans called this place Mini Akapam Kaduza ("water which runs both ways"). This is the eastern edge of what was formerly tallgrass prairie but that prairie has been almost eradicated by the advent of modern agriculture. An island of natural landscape in an ocean of soybeans and corn, Union Slough National Wildlife Refuge is a critical oasis for birds and other wildlife.

Today, about 1300 acres of the refuge is wetland marsh. The remainder is mostly tallgrass prairie (some native but most reconstructed from former farmland). As the refuge is also at the southern edge of the Prairie Pothole Region, this is critical breeding habitat for migratory waterfowl in the Great Plains. The Prairie Pothole Region covers about 10% of North America's waterfowl breeding habitat but accounts for about 50% of each year's new crop of ducks.

The refuge is open from sunrise to sunset every day of the year, unless closed during waterfowl migration or nesting seasons. The refuge office is open from 7:30 am to 4 pm, Mondays through Fridays except for Federal holidays. The office houses exhibits and a diorama displaying the wildlife and their habitat on the refuge. There is a four-mile auto tour (open in late summer and for special events) and a wildlife observation platform, both near the refuge office. There are several county roads that cross the refuge, too.

In spring, the auto tour route provides great opportunities to photograph the gorgeous plumage of the male wood duck during breeding season. In summer the route offers opportunities to photograph trumpeter swans and their cygnets on the water. Just remember that you must be in your vehicle unless you are at a designated parking area or on the observation platform. Hunting and fishing are allowed under all federal, state and refuge regulations. The refuge is day-use only: no camping, no campfires. Vehicles must stay on designated roadways. There are no entry fees involved.