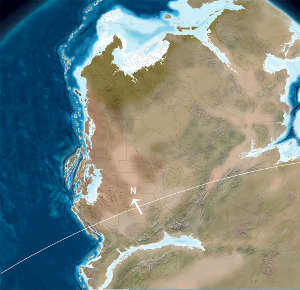 North America, 245 million years ago
Click or tap to see a larger version

The Early Triassic is the age when the archosaurs took over the planet. Archosaurs are classified according to their ankle structures and, as widespread as they were 220 million years ago, their only surviving direct relatives are crocodilians and birds.

The early Triassic was an arid time as the era began at the height of the agglomeration of the supercontinent Pangaea. Pangaea (all the land) straddled the equator in an era of relative global warmth. It was during the late Triassic that rifting and basaltic magmatism along the East Coast of North America signaled early stages of break-up of western Pangaea. By the time of the Triassic-Jurassic Extinction Event, Pangaea had clearly begun to break up but the pieces were still quite close together. Only crocodilians, pterosaurs and dinosaurs survived the Triassic-Jurassic extinction.

The breakup of Pangaea

The Greater Ancestral Rocky Mountains were first pushed up about 300 million years ago and by the beginning of the Triassic, they had been extensively eroded. Sections of the original uplifts were overlain with sediments washed down from above and terranes pushed onto the margins of the shelf. About the middle of the Triassic, Uncompahgria and Frontrangia were uplifted again and some of those peaks survived into the late Jurassic.

The Continental Divide in those days ran from eastern Canada to northern Mexico, and the situation was reversed from today as Triassic and early Jurassic rivers flowed to the Continental Divide as that was one of the lowland regions that eventually rifted and opened into a sea at the end of the Triassic. 245 million years ago, the equator ran across Pennsylvania and central New Mexico. During the Triassic the continents were arranged such that it was possible for an animal to walk from Siberia across the North Pole and continue south to cross the South Pole without crossing any oceans. 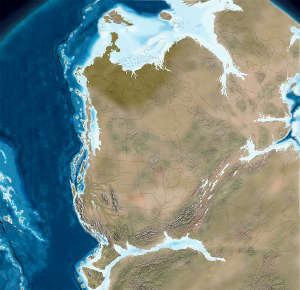 North America, 210 million years ago
Click or tap to see a larger version

The approaching McCloud Arc fragmented and collapsed against the North American plate. The Sonomian microcontinent broke off and accreted to the southwestern North American plate, causing the Sonomian orogeny in Nevada. The boundary of the terrane today is associated with the Golconda Thrust, a fault area near Golconda, NV. Another microcontinent, the Caborca terrane, was grating its way slowly southeast along the truncated continental margin, followed by a diverse suite of fore arc and inter arc deposits, fringing arcs, and trench deposits built up between and west of McCloud Arc elements as the Cordilleran subduction pattern began along the west coast of the North American plate. The early Cordilleran Arc built onto the reorganized western North American continental margin during the Middle Triassic (about 240 million years ago). At the end of the Triassic, the Wrangellia Terrane was still well offshore in Pacific Ocean.

A Sellosaurus of the late Triassic Period 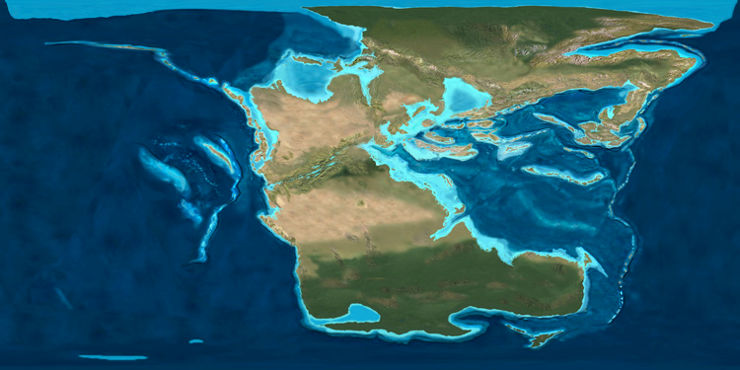