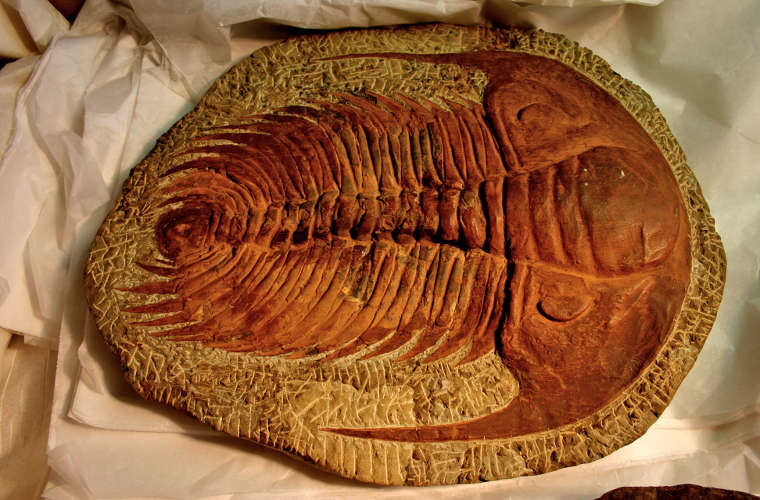 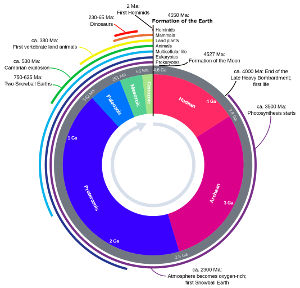 It was during the Paleoproterozoic that the Earth's atmosphere transitioned from a high carbon dioxide/nitrogen content to low carbon dioxide in a mostly oxygen/nitrogen atmosphere (a time also known as "the oxygen catastrophe"). There is evidence of several major glaciation events during the Proterozoic, including the Huronian Glaciation that came hand-in-hand with the oxygen catastrophe early in the Paleoproterozoic. The Huronian Glaciation was a major event (Snowball Earth) that lasted on the order of 300 million years, from about 2.4 to about 2.1 million years ago. There were at least four major glaciation events during the Neoproterozoic, too, with one climaxing in a possible "Snowball Earth" scenario late in the era.

Geological evidence points to a year in those days being about 450 days in length with days being about 20 hours long. Because of the Moon's gravitational effect on the Earth, that spin has further slowed to today's 24-hour day and 365-day year. That slowing of the spin is one of the contributory elements that has allowed life to proliferate on Earth.

The rock record left from the Proterozoic Eon is significantly more abundant than that of the preceding Archean. What's left of Archean deposits are characterized by formation under deep sea waters. In contrast, much of the Proterozoic rock we see today was formed in shallow-sea conditions, most likely sea basins internal to the continental lines we see today. Proterozoic rock is also less deformed by erosion and geologic action than Archean rock. Studies of Proterozoic rock have shown that the constant continental churn begun during the Archean continued almost unabated throughout the Proterozoic. It has been surmised that the periods of major glaciation coincide with periods in the cycle of supercontinent formation. 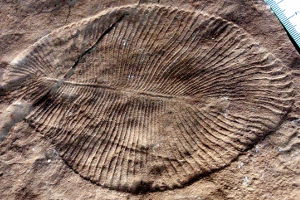 A fossil from the late Proterozoic

Researchers have found that the kinds of minerals found in ancient diamonds indicate the cycle of supercontinent construction and destruction began about 3 billion years ago and has continued on a cycle alternating roughly between about 300 million years and about 450 million years in length. That cycle has been supported a bit further by the Wilson Cycle (named after plate tectonics pioneer J. Tuzo Wilson, who first proposed it). The Wilson Cycle is based on dating the periodic opening and closing of ocean basins... where the geologic record doesn't go back more than maybe 170 million years. However, merging the ocean data with the land data gives a complementary picture. The supercontinent cycle also aligns with the graph of greenhouse climate v. icehouse climate: supercontinents cause icehouse while dispersed continents allow greenhouse.

As virtually everything is theory and the great extrapolations are based on few findings, some geologists have proposed supercontinents that go back to about 3.6 billion years ago. A fair bit of the data used in age calculations comes from the remains of ancient orogenies, mountain-building events that often began with the collision of tectonic plates. It has often been said that many mountain ranges mark the sutures between continents. That said, we don't know much about the supercontintents before the time of Columbia.

Eras of the Proterozoic Eon

The Oxygen Disaster (or Great Oxygenation Event, depending on how you look at it) occurred about the same time unicellular life exploded across the surface of the planet.

At first the oxygen produced through photosynthesis was absorbed into the oceans, making them slightly less acidic. Once the oceans were saturated oxygen expanded into the atmosphere where it bonded with methane and converted that to carbon dioxide. That reduced the volume of greenhouse gases in the air and the cooling began (carbon dioxide is not as efficient a greenhouse gas as methane). Free oxygen in the atmosphere also caused the extinction of most anaerobic species on the planet.

Then a supercontinent came together in what was the tropical regions of the planet back then and the stage was set for the Huronian Glaciation: 300 million years of veritable Snowball Earth, from 2.4 billion years ago to 2.1 billion years ago. It is speculated the period of glaciation ended when the supercontinent fragmented (tectonic magma-plume rifting) and the ensuing volcanoes began to spew more carbon dioxide and methane into the air.

There were two more major glaciation events near the end of the Proterozic, during the Cryogenian Age. The Sturtian and Marinoan Glaciations were the two greatest Ice Ages Earth has ever known. The Sturtian lasted about 60 million years, the Marinoan about 15 million years. It is speculated that both ended when atmospheric carbon dioxide finally returned to a level high enough for the atmosphere to retain enough of the Sun's heat to raise global temperatures enough to melt the glaciers. With mass glaciation, the only way for that to happen was increased volcanic activity in the breakup of a supercontinent. The Sturtian Glaciation was during the time of the major supercontinent Rodinia. Rodinia split into two minor supercontinents (Laurasia and Gondwana) that later came back together and formed the major supercontinent Pannotia.

The Proterozoic Eon ended when the Cambrian explosion of life began, shortly after Pannotia broke up and the Iapetus Ocean formed. The date has been set at the base of the major trilobite fossil record at about 541 million years ago, at the end of a major extinction pulse.