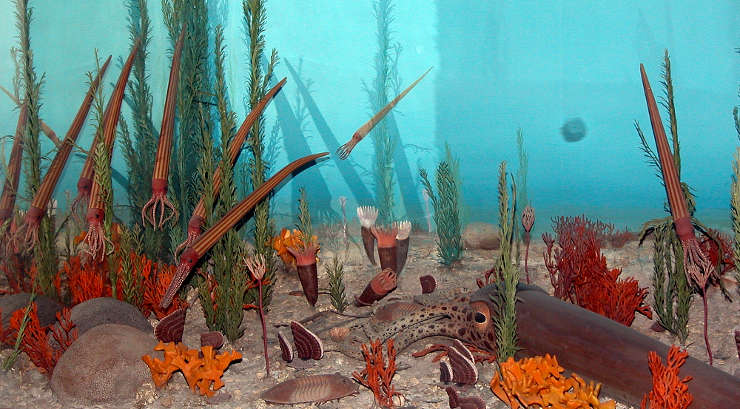 A diorama of lifeforms typical in the Ordovician Period 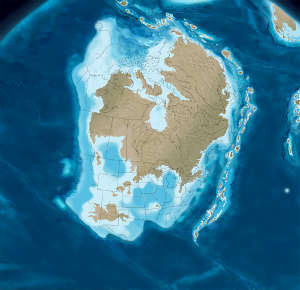 North America, 485 million years ago
Click or tap to see a larger version

The Ordovician Period lasted essentially from about 485.4 million years ago to about 443.8 million years ago. The beginning of the period is dated to the emergence of particular marine life forms as the boundary of the Cambrian and Ordovician is also known as the Cambrian-Ordovician Extinction Event in which many genera of brachiopods, conodonts and trilobites disappeared. The explosion of life begun in the Cambrian continued into the Ordovician but at the end of the period, a series of extinction events occurred that, taken together, comprise the second largest extinction event in the history of the planet as about 60% of all marine species disappeared. That said, the Ordovician Period left an abundance of fossils and several major petroleum and gas reservoirs.

In the beginning of the Ordovician, most land masses on the planet were separated from each other in the aftermath of the breakup of the supercontinent Pannotia. Gondwana hovered over the equator at first but drifted relentlessly toward the south Pole while Baltica, Laurentia and Siberia slowly converged on the Equator. Late in the period, the Gondwana supercontinent (Africa, South America) hovered over the South Pole and experienced short but intense periods of glaciation. For most of the Odovician, atmospheric CO2 levels were high and generally kept the climate warm. Then a period of heavy vulcanism spewed forth volumes of silicate materials which absorbed carbon dioxide from the atmosphere as the silicates eroded. A precipitous drop in atmospheric CO2 affected the shallow seas most and wiped out many organisms living there. At the end of the Period, the planet was gripped in a glaciation event that didn't release until well into the Silurian Period.

Geologically, the Taconic terranes approached Laurentia and collided to cause the Taconic orogeny in what is now the northeastern US. The Taconic arc formed offshore during the mid-Cambrian as a belt of volcanoes and by the mid-Ordovician, that arc had been pushed across a subduction zone and was riding up on the edges of Laurentia. The terrane extended from eastern Canada through New England into the Piedmont regions along the southeast coast. Eventually the arc disappeared as the materials were fully accreted to Laurentia and would be eroded and mixed into the Appalachians and mid-America through the Silurian and into the Devonian, when the next major accretion of material to the East Coast of Laurentia would occur.

The micro-continent Avalonia closed with Baltica, colliding with it near the end of the Ordovician. That collision eventually added Avalonia to Baltica and then Laurentia when Pangaea fully came together (that's how rocks from Avalonia are now found in Great Britain, the Canadian Maritime Provinces and throughout the coastal areas of New England). That tectonic movement caused the Iapetus Ocean to narrow in the north and the Rheic Ocean to open in the south, bringing on early convergent events in what is now the Arctic as Siberia, Laurentia and Baltica slowly rotated and moved toward each other.

The western side of the Laurentia craton saw little geological action during the Ordovician.