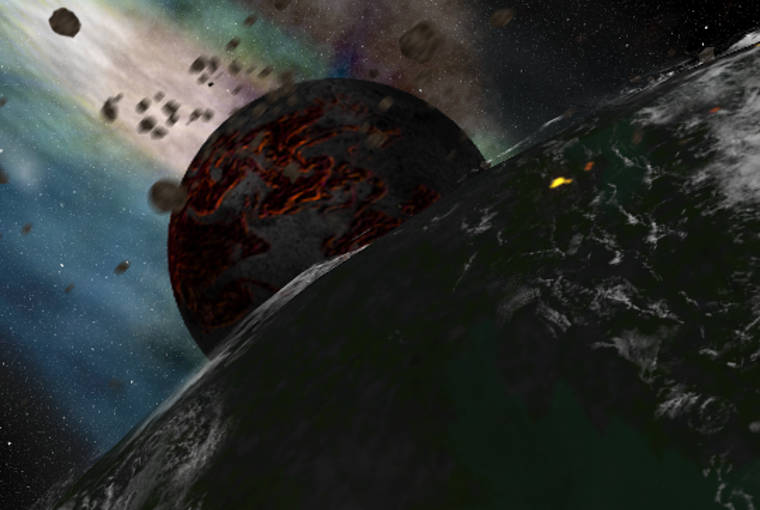 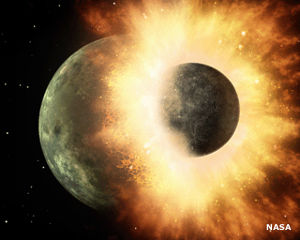 Artist rendition of possible creation
of the Moon scenario

The Hadean is the first geologic eon in the history of the Earth. The name was coined because of the hellish conditions that existed on the planet 4.55 to 4 billion years ago, during the earliest times of planetary formation. That said, in 2015 scientists in western Australia discovered remains of living organisms dated to be 4.1 billion years old. Scientists have also dated rocks found in western Greenland, western Australia and northwestern Canada to have been formed during the Hadean eon. Some zircons found in western Australia have been dated as old as 4.35 billion years, about 200 million years after the Earth became a discrete planetary object. Some of those ancient zircons show evidence of having been exposed to liquid water, implying that oceans or seas were present on the surface of the planet that long ago (it has been estimated that the vast majority of water on Planet Earth was created more than a million years before the birth of our Sun and it arrived on Earth during the Heavy Bombardment).

The Earth is estimated to have formed into a discrete object (with a crust, mantle and core) about 4.55 billion years ago. In those days the matter of the solar system was contained mostly within an ecliptic disk surrounding the sun. The gas giant planets and the rocky core planets were not in their final orbits yet and the gravitational shifts that came with orbital adjustments caused many perturbations in the orbits of smaller objects, causing many of them to crash into one planetoid or another. It has been theorized that the Moon was split off from the Earth by the glancing impact of a particularly large object (about the size of Mars) about 4.527 billion years ago. Analysis of rocks retrieved from the Moon during the Apollo space program shows materials relatively low in metallic content but also showing the same oxygen isotopic signature as the Earth. It is the Moon, spinning around the Earth since the time of that collision, that has made life possible here.

The Hadean was the era of the Heavy Bombardment and that's broken into Early and Late periods. The Early Heavy Bombardment coincides with the years of planetary accretion, a time when free-floating planetesimals began to collapse into discrete spheroids. Collisions between orbiting hard materials were fast and frequent. The surface of Earth was molten and the planet was most likely rotating at high speed. Slowly, though, the surface of the planet cooled and hardened. There is some evidence that the crust was solid enough that plate tectonic action began around 4.3 billion years ago.

The Late Heavy Bombardment overlapped the boundary between the Hadean and Archean eons. About mid-point of the Late Heavy Bombardment was when single-cell organisms began to appear. The timing brings up the question: Did life originate somewhere else and was carried here on space debris or did life emerge from the actual hell of the conditions of the time? For the majority of the eon, the Earth's atmosphere was just forming: it was high in carbon dioxide and water vapor but there was virtually no free oxygen. It was the relative dense concentration of water that made life possible on Earth as those first living cells most likely lived and died clustered around hydro-thermal vents at the bottom of the seas.

The Hadean was a time of high temperatures and radioactivity. After the impact that created the Moon, the planet was surrounded by a rock vapor atmosphere. The rock vapor settled back to the surface within about 2,000 years. However, that vapor left enough hot volatiles in the atmosphere that the atmospheric composition became heavy with carbon dioxide, water molecules and free hydrogen. Surface temperatures were above 250°C but surface water was liquid under the crushing weight. Volcanism was severe due to the continuing bombardment, internal radioactivity and the very slow cooling of the geothermal gradient.

Analysis of zircons found in western Australia has led to a "Cool Early Earth" theory that lasted from about 4.3 to about 4.1 billion years ago, the gap between the end of the Early Heavy Bombardment and the beginning of the Late Heavy Bombardment. The primary theory in regard to why the Late Heavy Bombardment happened advances the idea of planetary migration in the ecliptic plane sweeping planetesimals in the plane into discrete orbits based on fluctuations and passing resonances in the gravitational fields of the solar system as Jupiter, Saturn and Neptune migrated to the orbits they hold now. It's possible that during that time period, the inner planets went through the bombardment as a result of colliding with planetesimals pushed into their relatively stable orbits as the gas giants swept through space in that migration. Computer development of that theory has led to speculation about a fifth gas giant that was swung toward Jupiter by the passage of Saturn, possibly impacting Jupiter in a glancing blow but swung by the near encounter onto a path that eventually ejected it from the solar system. It's also been postulated that it was during those planetary migrations that the gas giants picked up their largest moons while their smaller moons are planetesimals that were pulled into orbits around the gas giants as those planetesimals passed nearby on their own highly elliptical orbits.

Lacking any kind of physical marker, by international agreement the Hadean eon ended 4 billion years ago and the Archean Eon began. 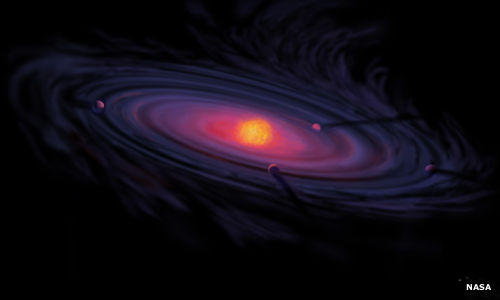