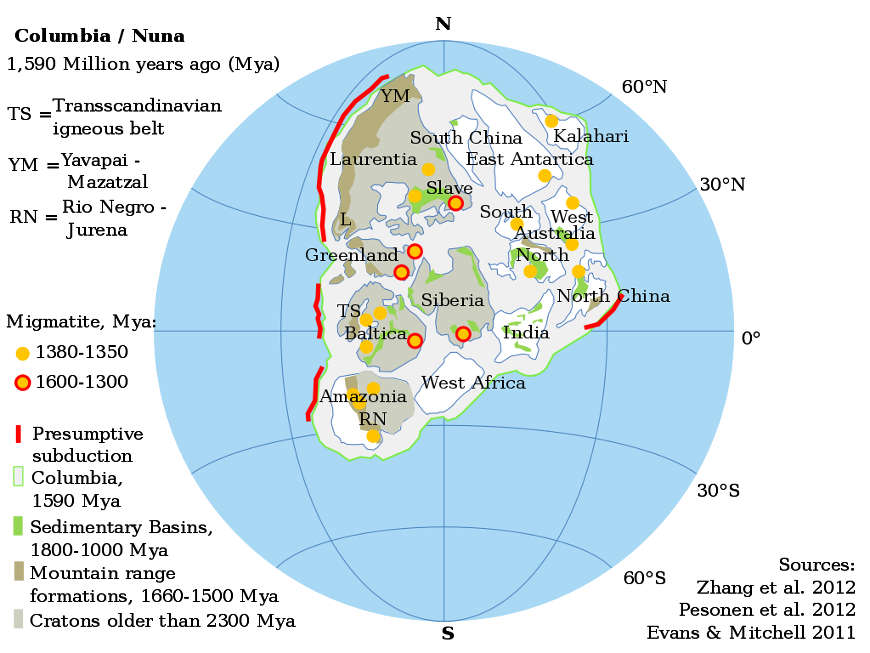 Columbia, about 1.590 billion years ago

Columbia was an ancient supercontinent postulated to have been assembled over a period of 300 million years, beginning about 2.1 billion years ago in the Proterozoic Eon. At peak accumulation, about 1.8 billion years ago, virtually all of Earth's land mass was joined to Columbia creating a surface estimated to have been about 8,000 miles long north-to-south and about 3,000 miles wide east-to-west. Included was Laurentia, Baltica, Siberia, Amazonia, Ukrainia, Australia, Kalaharia and North China. Western North America was attached to the east coast of India, western Canada to southern Australia. South America was rotated such that the Amazonian craton was cradled against the east coast of North America.

Once sutured together, Columbia was long-lived, existing for about 500 million years before noticeably fragmenting around 1.6 billion years ago due to increased magma plume activity in the Earth's mantle.

The Arctica region of Laurentia, Siberia and Baltica remained in one piece but continental rifting split the other cratons off and they drifted on their own until the supercontinent Rodinia came together about 1.1 billion years ago.