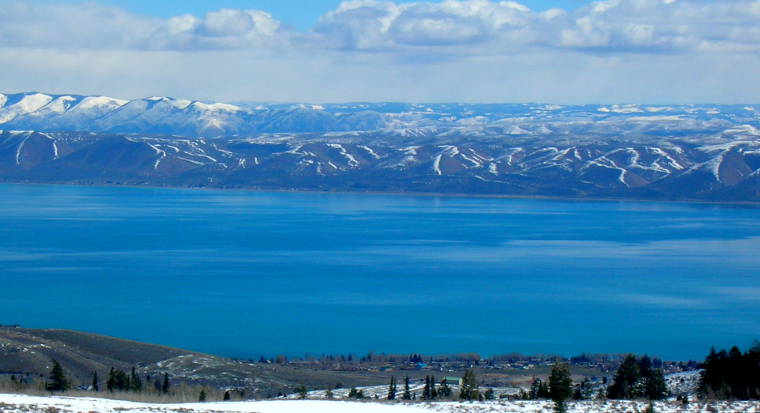 Bear Lake from above Garden City

Rich County is in northeastern Utah with Idaho to the north and Wyoming to the east. About half of Bear Lake is contained in the county, which means Rich County is home to Bear Lake State Park.

Joseph Miller, a fur trapper who trapped up the Bear River in 1811 was the first explorer of European descent known to have visited the area. The Bear River is supposed to have been named by Michel Bourdon, a trapper with Donald Mackenzie's first Snake River Expedition in 1818-1819. St. Louis fur traders came to Bear Lake and met with mountain men, fur trappers and Native Americans on Rendezvous Beach at the south end of Bear Lake in 1827 and 1828. The Oregon Trail led across the northeastern corner of Rich County when Dr. Marcus Whitman and his wife first traveled the route to Oregon in 1836.

Rich County was named for Charles C. Rich, an early LDS apostle. Brigham Young sent Rich into the area to survey and locate likely sites for settlement after the Homestead Act of 1862 opened the area up for homesteaders. Rich went through the area but thought the entirety of Bear Lake was included within the boundaries of Utah. He made agreements with the Bannock and Shoshone that helped mitigate early problems with them and the first settlement in the area was built at what is now Paris, Idaho. After that came Round Valley (now a ghost town) in 1863, Laketown and Kennedyville (now known as Garden City) in 1864, Woodruff in 1865, Randolph in 1870 and Argyle in 1875 (also now a bona fide ghost town).

Rich County contains 1,029 square miles of land and 58 square miles of water. Before the 1872 survey that determined the actual location of the Utah-Idaho State line, it was thought that Rich County included the whole of Bear Lake and the northern part of Cache Valley.

The county seat is Randolph, the largest city Garden City.

Because of the location (in a bowl east of the Bear River Range) and the altitude, most of Rich County sees temperatures that have reached a minimum of -40°F in the winter with a normal maximum around 90°F in the summer. There's also a problem with temperature inversions setting in during the winter and bringing very cold temperatures with fog, haze and smog for up to two weeks at a time. Woodruff averages only 57 frost-free days per year and presently holds the record cold temperature for Utah: -50°F, set on February 6, 1899. 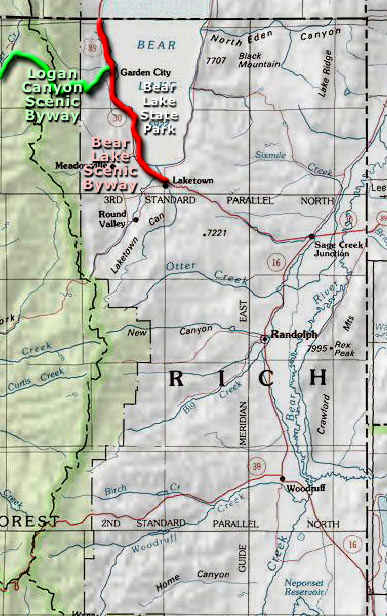 Map of the Rich County area