The City of Milford is located on the west side of the Mineral Mountains. A lightning-caused wildfire started near Milford on July 6, 2007 and blew up to burn 363,052 acres before it was contained on July 15, 2007. The fire was whipped by winds for the first 2 days and forced the closure of Interstate 15 several times.

At first, Milford was a collection of miner's shacks. The first real settler (Arvin Stoddard) arrived, claimed his 160-acre homestead and built a house in 1880. At the time, prospectors were still scouring the mountains to the west and southwest, looking for gold, silver and lead. Then a settler from Wales arrived in 1880 and built a smelter on the 160 acres next to the Stoddard claim.

There were a couple of cattle ranches to the west of the tiny settlement that had been claimed in the 1870's but Milford wasn't much until the Southern Utah Railroad made Milford their southern rail terminal. At that point, Milford became the main cattle shipping point for southwestern Utah. The Pike Springs Ranch was owned by B.F. Saunders of Salt Lake City and that ranch ran the largest herd of cattle in Utah. Milford quickly became the freighting terminus for southern Utah, southern Nevada and northern Arizona. 3 times the railroad tried to extend their line further west but it wasn't until 1901 that they could run a train all the way to Caliente, Nevada. Milford still maintained its importance because of its location and its abundant water.

Main Street in Milford was typical for a mining and cattle ranching town: boarding houses, mercantiles and saloons built in simple frame architecture (which, of course, tends to burn often). Eventually, most of downtown Milford was rebuilt in stone and brick.

Today, Milford is still a cattle ranching center but the mines have all but stopped and the smelters were shut down long ago. The town is pretty quiet now with 1 fast food place, 2 restaurants (including one of the oldest Chinese restaurants in Utah) and 2 motels.

The old Milford Hotel in downtown 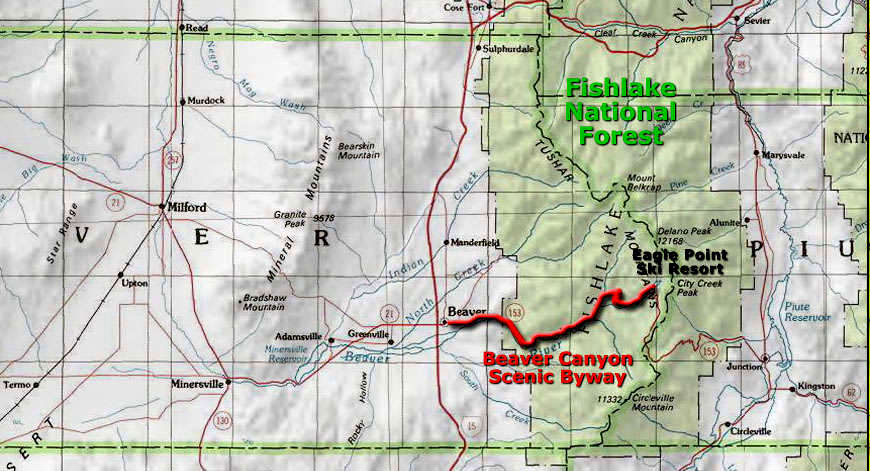