The Coop in Loa 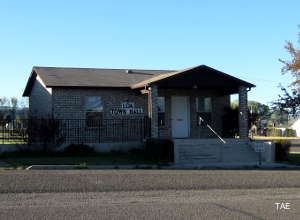 Loa is home to the Aspen Achievement Academy, a wilderness therapy program for emotionally and behaviorally disturbed adolescent male and female teenagers. From everything I've come across about the program, it's pretty controversial... but a lot of the folks in Loa seem to work there.

Anyway, Loa was first settled by a group of Mormon pioneers in 1876. The name was suggested by Franklin Young, a young man who had done his 2-year stint as a Mormon missionary in the Hawaiian Islands. He said the Hawaiian native term "Loa" stood for high, large and powerful. As Loa is one of the highest county seats in Utah, folks felt the name fit.

In 1897 the members of the Wayne Stake built the tithing office that is now owned by the Daughters of the Utah Pioneers. Once the presidential office for the Wayne Stake, it is now a museum and often used for meetings. The nearby Tabernacle was dedicated in 1909 after 3 years of construction.