On Main Street in Huntington 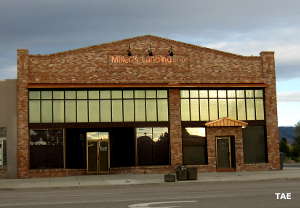 The largest town in Emery County, Huntington is in the heart of Utah's coal mining district. There are several coal-powered electric generating plants in the area and several operating coal mines, still. Everyone I talked to either worked in the mines, the power plants or was supported by one or the other. I heard a lot about how brutal the business is and how the people who do the actual work are just commodities: a dime a dozen. The brutality and the philosophy of life have contributed to a significant opioid problem in the area. Couple that with the LDS drive to reproduce and I see lots of human services problems coming down the pike.

Located at the foot of the hill on the eastern side of the Wasatch Front, Huntington is kind of a grocery supply stop for the recreation opportunities to the east (the San Rafael Swell) and the west (the Wasatch Mountains). On the north side of town is the terminus of the Energy Loop Scenic Byway, a route that travels up and over the Wasatch Front with forks at the top dropping down to Fairview on the west and through Scofield to Colton on the northeast. At the beginning of the byway is Heroes Park, a memorial to the heroes of a couple well-publicized coal mine disasters in the area.

The area was first explored by the Huntington brothers, William, Oliver and Dimmick in the 1850's. Their findings led to settlement parties crossing the Wasatch Front from the Sanpete Valley and beginning by constructing irrigation canals in the 1870's. The colony at Huntington Creek grew quickly, fed by settlers from three or four interrelated kinship groups in the Sanpete Valley. That produced a plethora of cousins in the area which has led to genetic problems in today's population.

The early economy was based on stock raising and farming but that soon changed to coal mining. The population grew until the Great Depression hit in the late 1920's, then grew slowly again until the early 1950's when the coal mines began to disappear again. By 1960, about one-third of the population had left in search of greener pastures. Then in 1972 the Utah Power and Light Company began to build the Huntington steam-electric generating plant in the mouth of Huntington Canyon. That led to a few years of boom town activity as former residents came back and new residents moved in to support the power plant and to work in newly opened coal mines to supply the power plant. Population growth peaked in the late 1990's and is down about 3.5% since 2000.

Because Price is located about 20 miles to the northeast and Huntington is not on any major travel route, retail operations have never really materialized in the town. In my drive through the area in May, 2017, I found only one motel open for visitors on a Saturday evening. I drove in from the south and left through Huntington Canyon.

Heroes Park, at the edge of town 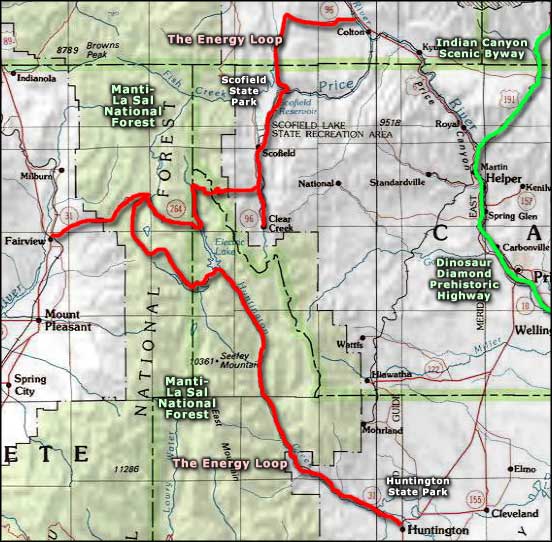