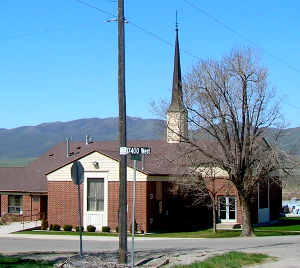 Howell is in an area once traveled by the Shoshone as they journeyed to and from their summer and winter camps, between the Great Salt Lake and the Idaho mountains. The late 1860's saw the transcontinental railroad being built about 10 miles south of present-day Howell near Promontory, Utah. One of the backers of that railroad was Charles Crocker of California. About the same time the Golden Spike was being driven at Lampo (connecting the two railroad lines and making one truly transcontinental railroad), Crocker was forming the Promontory Land and Livestock Company. This company owned most of the land from the Great Salt Lake north into Idaho and west to Nevada. They ran up to 30,000 head of cattle on the property with ranch headquarters in Howell (the Bar M Ranch), Promontory and at the Dilly Ranch. In those days, the headquarters of the Bar M (at Howell) consisted of a bunkhouse, storeroom, milk cellar, barn and a machine shed. North of the Bar M were the fenced horse ranches of William Andersen and James Hansen.

In 1910, Nephi Neeson bought 1,000 acres of land from Promontory-Curlew and built the first permanent, private residence at what became the town of Howell. A school opened in one of the Bar M Ranch buildings that same year, then moved into a newly built 2-room schoolhouse in 1911.

A reservoir had been built a few years before on Blue Creek and the Blue Creek Irrigation Company was formed in 1913. Canals were dug and the capacity of the reservoir was increased. In December, 1926, the Promontory-Curlew Land Company deeded the town site and the water system to the Howell Ward of the LDS.

In 1918, Jack Rich and Elmer Sorenson bought most of the Bar M Ranch property, including the livestock, the meadow land, the ranch house and the corrals. Then Jack Rich sold his part of the property to Elmer in 1927.

Howell became incorporated in 1941 and electricity arrived in 1946. There had been a local telephone network in place for years but everything was modernized and the old hand-crank phones were replaced with dial telephones by 1949. But even today, Howell is well off the beaten path... I had to take a side road off a side road to get there. And even then I wasn't sure...