Escalante is a small city in south-central Utah. If driving Scenic Byway 12 between Bryce Canyon and Capitol Reef National Parks, Escalante is the only place where a variety of services can be found. And in spite of all the general emphasis on the rock in the area, there are also great fishing opportunities at Wide Hollow Reservoir and Escalante Petrified Forest State Park on the west side of town.

A couple different expeditions passed thru the area before the first settlers arrived in 1875 but none of them included Fray Silvestre Veléz de Escalante, he was with the much earlier Dominguez-Escalante Expedition, a group who never came near the river, canyon or town that now bear his name. Four years after the first settlers arrived in Escalante, another group of Mormon pioneers passed through, sent by Brigham Young to colonize what is now San Juan County in southeastern Utah. The route they took to get there cost several months of hard labor as they had to continually raise and lower their wagons by rope and pulley. At the edge of the Colorado River, that drop was about 1,000 feet. So they located Hole in the Rock and spent the next several months just getting down to and across the Colorado. Then they had to get up the other side. Today the sections closest to the Colorado are under Lake Powell but the main portions of Hole in the Rock are above water and accessible via a high clearance 4WD vehicle.

The first settlers in Escalante were from Panguitch. They built most of their houses of brick and many are still standing today. In the early days the primary occupations were cattle and sheep ranching, logging, dairy farming and mining. The people were prosperous and the population grew. Then the CCC built roads through the area, connecting Escalante with Tropic and Panguitch to the west and Boulder and Torrey to the east. Within 20 years the population of Escalante had dropped by more than 1/3.

Tourism in the area picked up after Grand Staircase-Escalante National Monument was established in 1996. That stimulated business and local cash flow, which brought more residents... The BLM has estimated as many as 750,000 visitors per year to Grand Staircase and most of those visitors pass through Escalante.

Escalante is also included in the Mormon Pioneer National Heritage Area, with a really nice Heritage Monument on the east side of town. 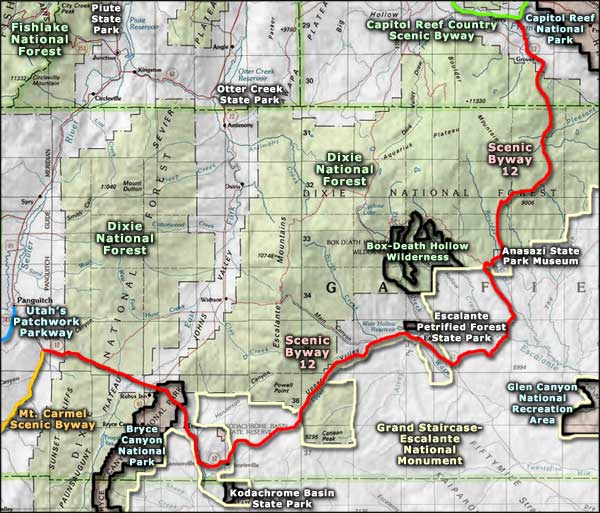