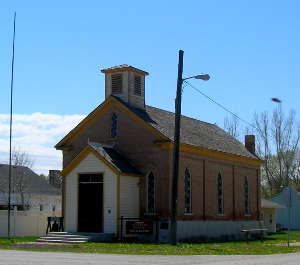 The town of Corinne was founded in 1869 by a group of former Union army officers and some non-Mormon merchants from Salt Lake City. It was an effort to build a Gentile town on the Union Pacific Railroad line that might grow large enough to upset the political and economic stranglehold the LDS Church had on Utah Territory. Named for General J.A. Williamson's 14-year-old daughter, Corinne was located about 6 miles west of Brigham City on the Montana Trail (the Montana Trail was a freighting route for goods and supplies going to the mining towns in western Montana). At its height, Corinne reached a population of maybe 1,000, and boasted that not one of them was Mormon.

Being a transhipment point between the railroad and the end of the Montana Trail, Corinne had 16 liquor stores, 15 saloons and a gun-slinging town marshall to keep the peace. There were also livery stables, blacksmith shops, hotels, boarding houses, gambling halls, banks, newspapers, warehouses, a saw mill, smelter, slaughter house, brick yard, flour mill, opera house and soiled doves. A large orchard was planted but irrigating the property brought the underground mineral salts to the surface and the trees never had a chance.

With support from various eastern newspapers and Washington, DC, politicians, the folks of Corinne tried to have General Williamson named as Utah Territorial Governor and tried to make Corinne the Territorial Capitol. They tried to have part of northern Utah removed from Utah and added to Idaho. But everything they tried failed. Perhaps it was because of their dogged efforts, though, that the Territorial Government awarded the vote to Utah's women so as to ensure the LDS their continued political control.

Then Brigham Young had the LDS Church build the narrow-gauge Utah Northern Railroad from Ogden to Franklin, Idaho. They had been intent on building further but were stopped by the Financial Panic of 1873. In 1877, the Union Pacific Railroad bought the Utah Northern and resumed construction further north into Idaho. Eventually they reached Marsh Valley and the junction with the Montana Trail there. That ended trail traffic to Corinne and supplanted it with rail traffic to Ogden. At that point, Corinne's Gentile businessmen all left town and headed for either Ogden or the new rail terminus in Idaho. Right behind them came Mormon farmers who bought up all the land around Corinne and turned the area into the Mormon settlement it still is. However, with the primary economic engine gone, the town suffered a decline in fortunes.

One of the historical buildings in town 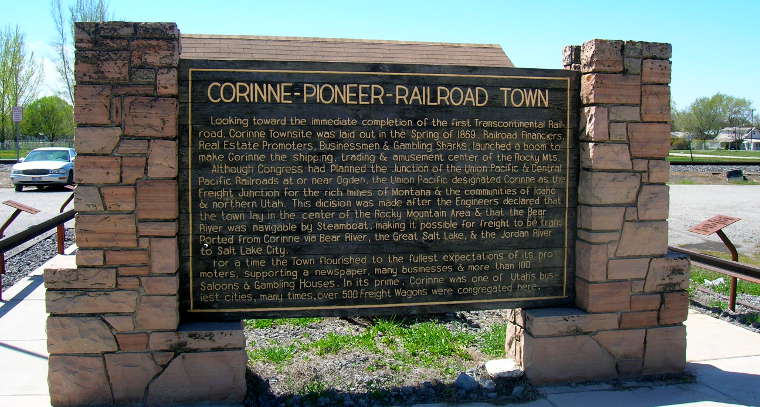