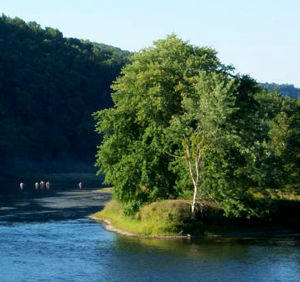 Allegheny Islands Wilderness is composed of seven islands in the Allegheny River totaling some 368 acres in size. The islands were all created as a result of the river depositing sand, mud and clay in specific spots along the waterway. The islands tend to be forested with sycamore, willow and silver maple. The largest island is 96 acres in size, the smallest 10 acres. One of them, Thompson's Island, saw action as the site of the only battle fought in northwestern Pennsylvania during the Revolutionary War.

85 miles of the Allegheny River have been designated for recreational status under the auspices of the National Wild & Scenic Rivers Act. That means the Allegheny sees a lot of action from folks in canoes, kayaks and rafts. Camping is allowed on any of the islands in the wilderness but many other islands in the river are privately owned: you want to be sure you're on the right island. The wilderness offers no facilities, it was only designated as a wilderness to protect and preserve the habitat, the old-growth tree cover and the public's recreational opportunities on the river. Some of the islands have very dense undercover making it hard to get around on them. Baker Island was run over by a tornado in 1985 and most of the large trees were blown down and destroyed. Camping is available nearby at Buckaloons Recreation Area, about 15 miles west of Warren, Pennsylvania. The Allegheny Islands Wilderness stretches for 56 miles down the Allegheny River, from Buckaloons Recreation Area to Tionesta.