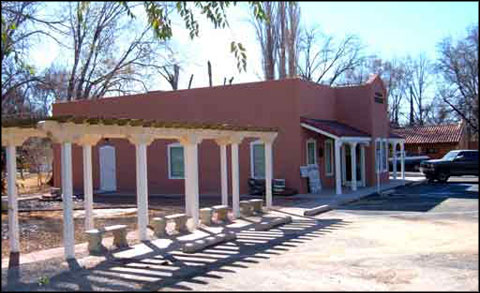 Tularosa sits in the bottom of the Tularosa Basin, a large valley along the western flanks of the Sacramento Mountains. The village is noted for the large number (and size) of cottonwood shade trees and for the local folks' efforts to preserve the adobe style architecture of its Territorial past. The village motto is "City of Roses."

The name comes from the Spanish description of the rose-colored reeds growing along the banks of the Rio Tularosa. It was that water supply that attracted the first settlers in 1860 but the Apaches soon drove them out. After a historic battle with the Apaches at nearby Round Mountain, Hispanic farmers from the Rio Grande valley did finally settle in and start farming and ranching. The Town of Tularosa was officially established in 1863. That original plat included 49 blocks and distributed and recorded the existing water rights. The first irrigation system established by those pioneers still provides water through the town and contributes to the growth of the cottonwoods and the private gardens and landscaping that give much of Tularosa its character. In 1979, all of the area included on that original plat was entered into the National Register of Historic Places as a bona fide historic district.

In the early 1900's the El Paso & Northeastern Railroad (now part of the Southern Pacific Railroad) built a line south from the coal mines at Dawson, New Mexico, passing through Tucumcari, Carrizozo and Tularosa to bring coal to the steel mill in El Paso. That was expected to bring more growth to the Tularosa area but didn't. It did make shipping the local agricultural products out easier.