Spanish colonists began settling at different locations in this valley about 1615. At first, relations between the Spanish settlers and Taos Indians were friendly but they soured over time because of demands for tribute from the Spanish encomenderos and because of brutal treatment from the Franciscan missionaries in their zeal to convert the "heathens" to Christianity (this was a tribe that had lived in multi-story complexes with running water and sewage "facilities" for several centuries already while most of the Spanish invaders came from a place where folks used their drinking water as a toilet). Some of the residents at Taos Pueblo killed their priest and some of the Spanish settlers in 1640 and fled the area. They returned in 1661 to a situation that had gotten worse in their absence.

The Spanish military, governors and priests had gotten far worse in their treatment of the Indians in general, and actually punished the Taos tribe when they returned. The general resentment among all the Pueblos in the area continued to build and that led to the Pueblo Revolt of 1680 with the expulsion of the Spanish from New Mexico.

In 1692, under the leadership of Don Diego de Vargas, the Spanish came back and reconquered New Mexico. But this time around, there were several legal mechanisms in effect that stopped the worst of the Spanish depredations against the Indians. And life for the Indians and the incoming settlers was much more peaceful and mutually respectful. If only the Spanish had been able to leave their diseases and dirty habits behind...

The 1700's saw many raids on Taos by the Comanches who lived on the eastern plains of Colorado. Several Spanish expeditions were organized to go out and stop them but none of them did any good until 1779, when Juan Bautista de Anza led troops against the Comanches at the Battle of Cuerno Verde, east of Greenhorn Mountain in southern Colorado. His troops succeeded in killing the Comanche chief and several other tribal leaders. That ended the big problem with that tribe.

In 1796, the Don Fernando de Taos Land Grant was given to 63 families. This resulted in the establishment of the Taos Plaza and surrounding community. It was soon the most important settlement in the area, outside of the ancient San Geronimo de Taos Pueblo, 3 miles north of the Plaza.

In the late 1700’s, the land grant families built their homes and businesses around the Taos Plaza so that the window-less rear walls provided a good, secure defensible position. There was a water well in the center of the Plaza and when an outside threat arose, livestock was brought into the Plaza for safekeeping. There were also strong wooden gates at both ends of the Plaza.

In peaceful times, the Plaza served for many purposes: church processions, political speeches, music, horse trading, farmers market, small talk and the assembly of militia. It wasn’t until the mid-1800’s that wagons traveling the Santa Fe Trail first arrived at Taos. Before the wagons, trains of pack animals were often seen here, with trade goods being unloaded for customs inspection or with local products being loaded up for trading in faraway places.

As business grew, the Don Fernando and Columbian Hotels were built around the Plaza (the La Fonda now stands where the Columbian was). About 1830, a courthouse and jail occupied a site on the north side of the Plaza. There’s been a few gambling establishments and saloons doing business around the Plaza, too. In the Taos Rebellion of 1847, some of the bloodiest fighting took place in and around the Plaza. When the fighting was over, some of the rebels who survived but got caught were quickly tried and publicly executed on the Plaza. As a result of the Taos Uprising, there is still no signed treaty of peace between the United States Government and the Indians of Taos Pueblo.

1899 saw the beginnings of the "Taos Society of Artists." Over the years this group grew to be major influence on American and Southwestern art. Writers such as Aldous Huxley and DH Lawrence were attracted to Taos, too.

In 1932, a new Taos County Courthouse had to be built after a raging fire wiped out everything on the north side of the Plaza. That Courthouse has since been replaced but the old building is still here (filled with retail stores) and the murals on the walls are from the WPA days. Most of the painting was done by some of the early artists who helped make Taos a world-known art colony.

The Corazon de Taos has been preserved pretty closely to its original design. The streets are narrow and not straight. The whole area immediately north of the Plaza is now a very busy pedestrian mall. There are historic museums interspersed with art galleries, colonial artifact shops, trinket stores and high-end clothing shops. Some of the old trading company signs are still in evidence: Paris, London, New York, Taos, and in the early days of the Santa Fe Trail, this was very true. What went on in Taos often had direct effect on the fashion markets on the East Coast and in Europe, and vice versa.

You'll notice that nearly everything in Taos is designed and built in some rendition of either Pueblo or Territorial architecture (the Super Walmart conforms to this, too). Even in the huge influx of tourists and big money, this has remained sacred land and the folks have been able to preserve quite a bit of its' original quality. But over the years, I've watched the residential sprawl just get bigger and bigger. Being a world-class tourist attraction isn't all "honey and roses." 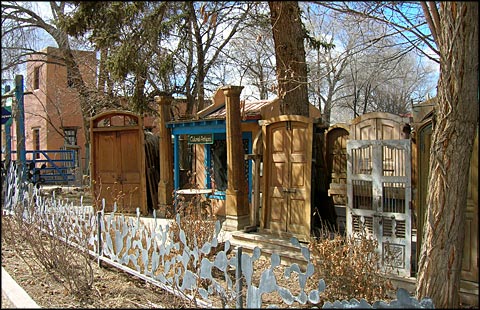 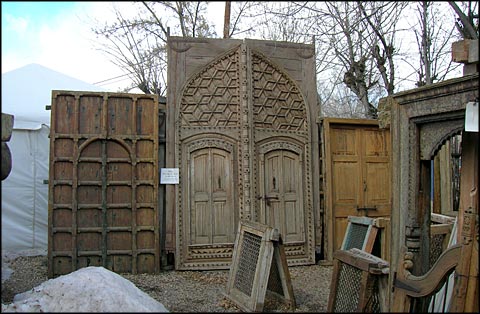 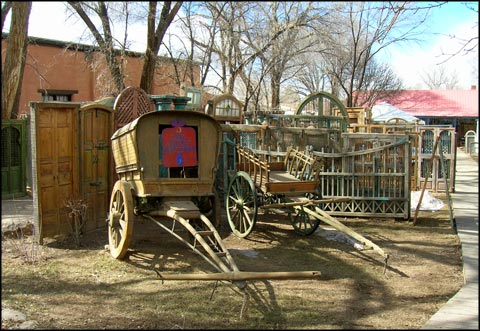