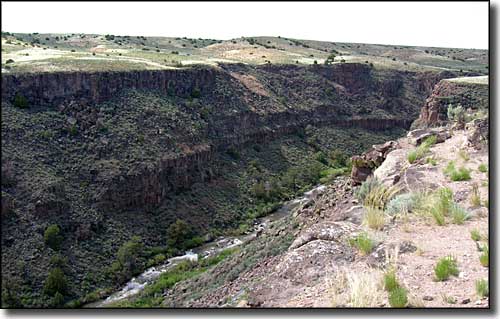 At the top of the Box, between Pilar and Ranchos de Taos, looking north

The area of the Rio Grande Gorge that I am talking about is the area between the Dunbar Bridge in Arroyo Hondo and the Taos Junction Bridge in the north end of Orilla Verde Recreation Area. The Gorge does go further north and south than that. West of Questa (and north of this area) is the Rio Grande National Wild and Scenic River Area, another area of incredible landscape, whitewater rafting possibilities and cold stream fishing.

The Taos Box on the Rio Grande is one of the primary whitewater rafting zones in northern New Mexico. Most of the photos here were taken in the vicinity of the Taos Gorge Bridge, although a couple were taken several miles downstream along the East Rim Trail.

Just below the Dunbar Bridge, on the west side of the river, is a natural hot spring with a couple of home-made soaking pools. A couple miles downstream from there on the east bank are the soaking pools of another hot spring, this one at an old stagecoach stop right on the river. It is accessed from the Arroyo Hondo area just off of State Highway 68 where there is a jeep trail leading southwest to the Gorge rim. At the rim there is what's left of the old stagecoach road cut into the gorge wall leading down to the river at the Stagecoach Springs. This used to be an overnight stop with a change of horses and a relatively easy ford of the river before heading up the western rim on another hand-cut trail just wide enough for the old coach. I'm sure there are others in the middle of the Box but these are the only two hot springs in the canyon that I've ventured into 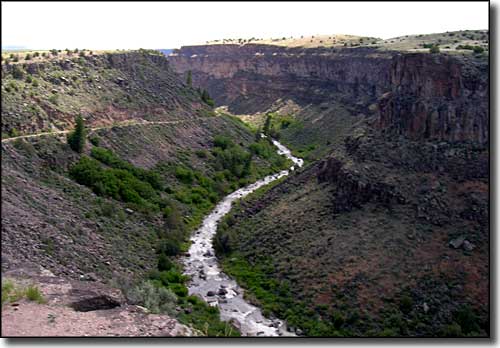 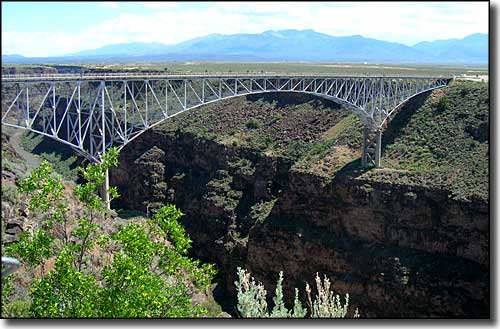