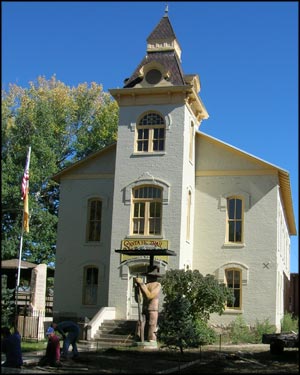 With a history as colorful as the buildings that line its streets, Springer finds its beginnings in the turbulent days of the Maxwell Land Grant, when the Utes and Apaches roamed the territory, and trappers, prospectors, buffalo hunters, cattlemen, and outlaws sought their fortunes all across the land.

Located six miles west of the Santa Fe Trail Rock Crossing of the Canadian River, Springer is midway between the Point of Rocks and Wagon Mound, which are two well known landmarks even today.

The Santa Fe Trail Museum (photo on the left) is housed in the Old Colfax County Courthouse, built in 1882. The Museum commemorates the thousands of men and women who bravely pioneered across the unknown plains of the western United States.

Just off the Santa Fe Trail in Colfax County lies an extraordinary Victorian mansion built by the infamous U.S. Senator Stephen W. Dorsey in 1880. With 36 rooms and 10,000 square feet to roam, this magnificent log-and-masonry home features paintings from Paris, Dorsey's prized stuffed hunting trophies, and a variety of curiosities on display from his sporting lodge. Once a focal point for social life in northern New Mexico and the gathering point for some of our country's most powerful men, the Dorsey Mansion sits alone on an expansive grasslands, a forlorn reminder of a vast empire long gone.

At an altitude of 5,857 feet, Springer's climate is pleasantly comfortable. Summer days are warm with cool nights and winters are moderate. Springer's overall dry climate has attracted many people over the years suffering from respiratory ailments - and in some cases, these people have been cured here.

Fort Union was originally established in 1851 to protect travelers on the Santa Fe Trail from Indian attacks and evolved to serve as headquarters for the Military Department of New Mexico. Located approximately 48 miles south of Springer, Fort Union National Monument features a self-guided trail through the ruins of what was one of the largest military forts in the Southwest.

Philmont Scout Ranch hosts thousands of Boy Scouts every summer. The Ranch is also home to the Kit Carson Museum at Rayado, in the house that Kit Carson lived in for many years.

Prior to 1870, Mr. Lucien B. Maxwell was the sole owner of the Maxwell Land Grant, an enormous tract of land that now lies mostly in modern-day Colfax County. The town that is now Springer, named for the prominent lawyer and paleontologist Frank Springer, used to be called Maxwell.

After the Santa Fe Railroad made its way through Springer in 1879, the town developed as the center of trade in northern New Mexico. From 1882 to 1897, Springer served as the county seat of Colfax County. The old County Courthouse still stands, its yellowish exterior a nostalgic monument to the ruthless outlaw gangs who passed through its portals.

The population of Springer is down more than 20% since 2000. 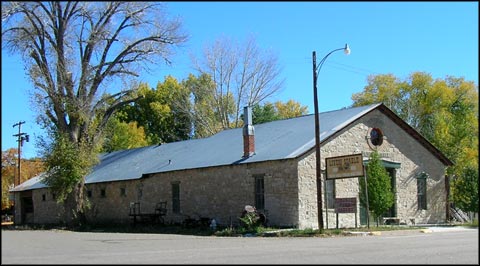