La Villaréal de la Santa Fe de San Francisco de Assisi (the Royal City of the Holy Faith of St. Francis of Assisi), the original name of the city we now know as Santa Fe. With a name like that, the city must also have quite a history... and it does.

There were several Pueblo Indian villages in this area along the Santa Fe River starting somewhere between 1050 and 1150 CE. While Francisco Vasquez de Coronado first came through the area about 1515, the first Spanish settlers didn't arrive until about 1598. That was the year Don Juan de Oñate, first Governor and Captain-General of Nuevo Mexico established his capital at San Juan Pueblo (also known as Ohkay Owingeh), about 25 miles north of Santa Fe. Nuevo Mexico's third governor, Don Pedro de Peralta, actually founded Santa Fe as the capital and gave it that illustrious name in 1608.

Since the Spanish first pulled up, set up camp and started to build here about 1608, the name of Santa Fe has stirred imaginations all over the world. It's kind of strange to think that this little, tiny village set up at the end of the supply line, 350 miles north of the last outpost of civilization (Chihuahua), almost 400 years ago, should have become the magical archetype that it has. And some of the stories that live in the magic:

In 1630 and 1635, Frey Alonso de Benavides wrote memorials to the King of Spain and to the Pope describing a beautiful 14th century statue of the Virgin that he brought to Santa Fe from Mexico City in 1625. "She is an image in the round of the Assumption," are the translated words that he used. She was originally installed in the parish church as "Our Lady of the Rosary" but most folks called her "La Conquistadora," in reference to her unification of New Mexicans in faith and love. She became the "patroness" of the Province of New Mexico and of the city of Santa Fe. A daring rescue by Josefa Lopez de Grijalba saved her at the outbreak of the 1680 Pueblo Revolt. She was returned to Santa Fe in 1693 with Don Diego de Vargas. Today, she stands in her chapel in the north transept of the Cathedral Church of St. Francis of Assisi.

In 1712, Governor José Chacon, Marqués de la Peñuela, signed a Fiesta Proclamation honoring Don Diego de Vargas (who had died 8 years earlier). After the 1680 Pueblo Revolt, de Vargas had returned to Nuevo Mexico and retaken all the former Spanish territories. This Fiesta was to honor the fact that de Vargas had accomplished this task by judiciously balancing peace and diplomacy with a show of military strength, and through his obvious devotion to La Conquistadora. That Fiesta tradition continues today with Fiestas celebrating de Vargas each September in Santa Fe.

As Santa Fe grew over the years, the local architectural style was pretty eclectic, eclectic to the point that Santa Fe looked a lot like "Anywhere, USA." When the Atchison, Topeka & Santa Fe Railroad elected to pass through Lamy (and not Santa Fe) on its way to Albuquerque and then the Federal Government closed down Fort Marcy, the city suffered an economic setback that lasted for more than 20 years. What revived the economy of the city (other than the burgeoning state government offices) was a decision in 1912 to promote tourism. To further that end, the city fathers decided to impose a uniform style of building on the city: the Spanish Pueblo Revival look. In 1930 that definition was expanded to include "Territorial style," from the pre-statehood period with portals and white-painted door and window trims. A city ordinance passed in 1958 requires new and rebuilt buildings to be Spanish Pueblo or Territorial in design with flat roofs, vigas, canales and other features suggestive of traditional adobe construction. This ordinance is especially enforced in the city's designated historic districts. 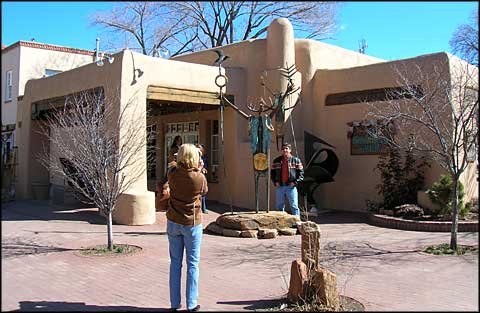 The first time I came to Santa Fe, this was a gas station
Now it's an art gallery 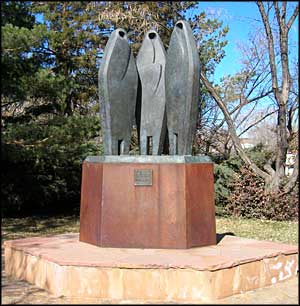 Today, the city of Santa Fe is in flux. Over the last 40 or 50 years, the residents have watched as the city has been remade into something it never was. In my mind, if it wasn't for the magic of place, they would have killed Santa Fe several times over. The growth of commercialization is not a straight-line but an ever-increasing curve. I remember Santa Fe from before the Plaza became a mall of trinket shops (note the comment below the photo of the Frank Howell Gallery). The Plaza itself has been a commercial setting from the days of the founding of La Villareal.

In Hispanic culture, the Plaza is a place for coming together, for performing public functions, for defense in case of attack, for government to communicate with the people, and for churches to open their doors. When the American traders first appeared in Santa Fe, they took the functions of Plaza to the next level. If it wasn't for the strength of the Native American and Hispanic traditions, and the people who follow them, we might not have a Santa Fe now. Santa Fe has a living, breathing soul, and it's these people of the Earth who keep it connected and alive, not the great American commercial entities. There's a photo above this of the portico of the Palace of the Governors. You'll notice some folks sitting against the wall under the portico. This whole area of covered sidewalk is reserved for card-carrying enrolled members of particular pueblos to sit and display their native wares for sale. You'll find other folks scattered around town with similar displays of similar stuff but under this portico, everyone and everything has been sorted out as to "authenticity" and only those with the ID card are allowed to display here. In the stores around the Plaza, anything goes. The folks under the portico fought long and hard to preserve the "purity" of that space under the portico and when I do business with them, I know I'm getting the real thing from the real folks who made it with their own hands. I once bought a wedding vase for a gift in one of the shops on the Plaza and later discovered that it had been made by Indians in a pottery factory on a far-off reservation, and that qualified it as being "Made by Native Americans" under American law. That's not what I had wanted to give my friends.

The Plaza itself becomes a marketplace several times a year. One of the big ones is Indian Market (usually in August). For Indian Market, a big chunk of the city is taken over but the center of activities is on the Plaza. Hispanic Market is the second big one, again with most activities centered around the Plaza (usually in mid-summer). The third big festival is Fiestas (the weekend after Labor Day). Fiestas is centered around the Plaza but the Burning of Zozobra takes place at Fort Marcy and then the crowd returns to the Plaza for the rest of the party. All of these events bring huge crowds of people into the city, never mind the hordes of pedestrians they bring to downtown.

The photos on this page were all taken in the beginning of March (between 10 AM and noon). There's quite a few people around but it's not like summer. I was easily able to park within 4 blocks of the Plaza (I could have parked closer if I'd wanted to look around a bit) for free. Because my particular "thrust" at the time was about the Santa Fe Trail, I walked into the downtown area on Santa Fe Trail. Once I hit the Plaza, I never went more than one block from it before I started back out to my car on Santa Fe Trail (by Paseo de Peralta). Hopefully, I have a reasonable presentation as to what's in the heart of the city. But I'm a bit of a purist, and Santa Fe has become so commercialized (and Californicated - actually, there's almost a war between the Californians and the Texans that's driving the cost of everything - I think the minimum wage inside the city limits is $10.50 per hour)... 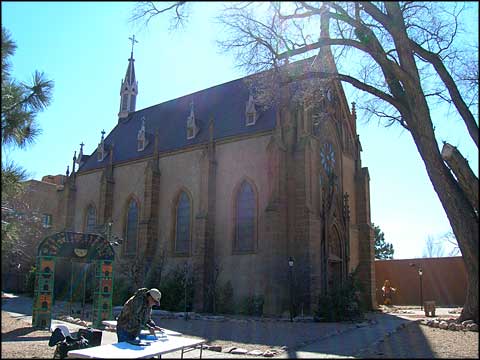 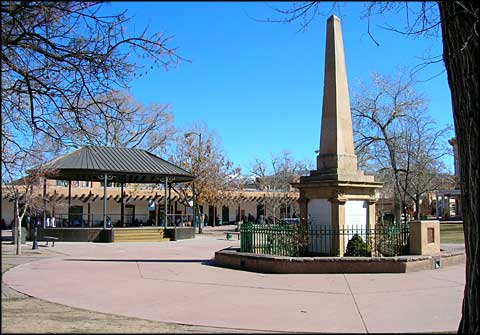 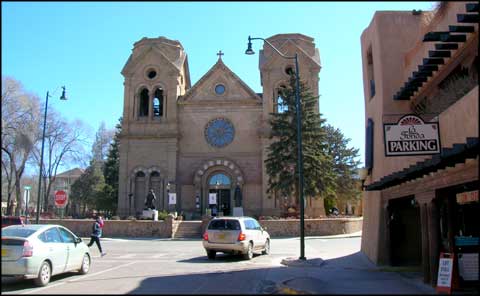 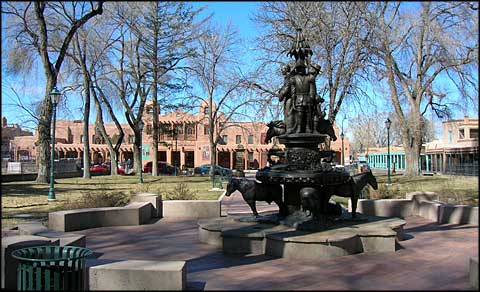