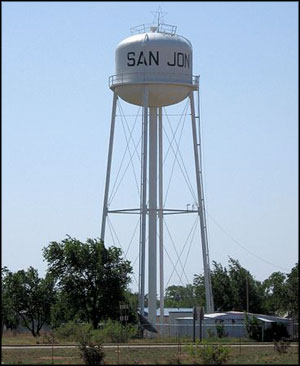 San Jon was founded in 1902 along the proposed route of the Atchison, Topeka and Santa Fe Railroad. Population didn't really start to grow until after the railroad tracks actually arrived in 1904. Then came US Highway 66 and San Jon became an important stop along the way, catering to travelers passing by with numerous, hotels, motels, cafes and gas stations. Then Interstate 40 was built around the town in 1981 and most of San Jon went out of business. Today, there's only one motel left, along with a couple cafes and gas stations clustered around the lone highway exit on the north side of town. Most folks commute to Tucumcari for work. The population is down more than 29% since 2000.

The town is located east of Tucumcari and maybe 15 miles north of the northern escarpment of the Llano Estacado (the Staked Plains). The countryside is classed as semi-arid: sparsely vegetated with creosotebush, mesquite and various species of cactus but it does support a good population of pronghorn antelope and a few cows...