I didn't know what I'd find in Reserve as I didn't know much about the place other than it is pretty remote. But I did find several small grocery/hardware/camping supply/general merchandise stores, a couple of gas stations, a liquor store, Uncle Bill's Bar, and the Catron County Courthouse. Except for the monument to Elfego Baca and the prominent Catron County Courthouse, Reserve could have been any one of hundreds of small crossroads' towns in the mountainous areas of the American West: it's in a beautiful, forested, mountainous setting miles and miles from anything else...

Hiking around in the countryside around Reserve you'll probably come across pre-Columbian Mogollon and Anasazi ruins and petroglyphs. There's also more than a few old west sites in the bush. In the 1860's groups of Hispanic settlers established a string of plazas along the river, naming them Lower, Middle and Upper San Francisco Plazas. Late in the 1870's, Anglo settlers started moving in and renaming things. Upper San Francisco Plaza became Milligan's Plaza (Milligan was a saloon owner and merchant)... and that's where the trouble started.

Around about 1884, drunken Anglo cowboys were terrorizing the Hispanics in the area and a call went out to Socorro (then the county seat) for help from the sheriff's office. Elfego Baca (age 19 and already a sheriff's deputy) was dispatched to see what could be done. First thing he did was arrest one Anglo cowboy, then the others in the gang went berserk. Baca holed up in a broken down cabin and defended himself mightily during a 33-hour gun battle. The Anglos kept shooting and even threw some lit dynamite at him but he escaped almost untouched, killing and wounding several of the Anglo cowboys in the process. The Disney Company made a movie to commemorate the events but, as usual with Hollywood, the facts were slightly blurred. 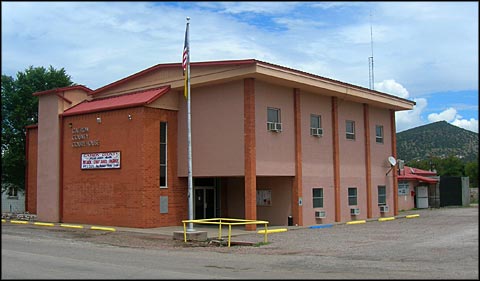