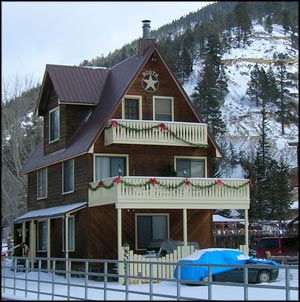 Red River is a bustling little resort town in the Sangre de Cristo Mountains of northern New Mexico. It's the local recreational activities that have kept the town alive. It was originally founded as a mining center, with logging running a close second. Over time, the majority of the mines in the area ran out of ore, except for the Molycorp mine between Red River and Questa. That's a huge molybdenum mine but it opens and closes with the vagaries of the price of molybdenum in the world (molybdenum is used primarily in the process of making hardened steel).

The location in an east-west valley is perfect for winter activities. The ski area is excellent with lifts rising almost directly from Main Street. A fair bit of the commercial area of town is composed of structures first built in the Victorian era and most have been renovated while keeping that Victorian feel.

In the old days, Red River was more widely known as "Rio Colorado." It was one of the earliest of the Spanish settlements in northern New Mexico and figures prominently in the stories of exploration and settlement of the San Luis Valley of Colorado. Zebulon Pike and John C. Fremont are two of the earliest American explorers who got to spend some time here.

Later on in the 1800's, Red River was a wild and woolly place. The area attracted a lot of mountain men with its huge forests and abundant wildlife. When the miners started to arrive in the 1870's, they built up the town with several saloons and brothels, just for a bit of that authentic Wild West ambiance. Many famous gamblers and other outlaws spent some time here. By 1895, the booming mining camp had a population approaching 3,000. The mines only lasted for a few years and then the population started to drop off. By the 1930's, the remaining Red River die-hards started turning to tourism as a way to sustain life in the valley and have been reasonably successful at that endeavor ever since.

Red River commemorates that heritage every year with the Memorial Day Motorcycle Run, a 3-day blast. There are also the Sportsman's Weekend, Softball Tournaments, Red River Music Festival and Chili Cook-off, Top of the Mountain Bike Race, Enchanted Circle Century Bike Tour, and the Aspencade Arts and Crafts Show scattered through the year. Red River offers something for everyone in every season.

As you can see, I came through town for these photos on a winter's day. It was March 1, and the wind was blowing pretty good. I came in from the east, from Eagle Nest, over the Enchanted Circle Scenic Byway route. After the few minutes I spent hiking around in the blowing snow atop Bobcat Pass, the breeze in town was nothing. The ski slopes were in great condition and there was hardly anyone out there. If I didn't have a foolish day job at the time, I'd still be in Red River checking out the slopes. Which reminds me: