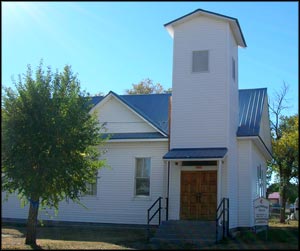 Springer was originally named Maxwell but when the folks decided to change the name of that town to honor Frank Springer, the Village of Maxwell was born, named for Lucien Bonaparte Maxwell, heir of the Beaubien-Miranda (Maxwell) Land Grant.

Maxwell is about half-way between Raton and Springer on the I-25. A few miles northwest of town is the Maxwell National Wildlife Refuge, a beautiful migratory waterfowl sanctuary.

Maxwell was originally established as a railroad stop on the Atchison, Topeka & Santa Fe Railroad.

Lucien Maxwell gave the right-of-way to the railroad in hopes that it would bring new settlers who'd buy land from him on the Maxwell Land Grant. Instead, the railroad mostly brought squatters and outlaws until Maxwell finally sold the whole property to a group of English and Dutch investors who hired their own gunmen to take care of the problem (and that's a whole other story: The Colfax County War).

These days, this is big cattle ranching country... although the recent long-term drought has taken a big chunk out of that, too.

The population of Maxwell is down more than 7% since 2000.