Monument at the Project Gnome Site east of Loving

Loving is a small town near the northern edge of the Chihuahuan Desert and over the last 30 years, Loving High School has accumulated ten state titles for softball, one for basketball, three for football, three for track and four for baseball. That's pretty good when you consider almost half the students who enter the high school don't graduate.

Loving was one of the regular campsites along the Goodnight-Loving Trail, a major cattle-herding trail from the days of herding masses of Texas longhorns north to the railhead at Dodge City, Kansas, or to the greener grasses of eastern Montana and Wyoming.

Near Loving is the Project Gnome Site, location of an underground nuclear test by the Atomic Energy Commission in 1961 as part of the Plowshare Program. The device was placed at the end of an underground corridor more than 1,000 feet and long and 1,200 feet deep (in an old salt mine - the area is close to where the Waste Isolation Pilot Project is now). The device was rated at the power level of 3,100 tons of TNT and when detonated, created a cavity 164 feet long and 72 feet high. Workers safely re-entered the chamber several months after the blast to take measurements. There was one other Plowshare Program test in New Mexico (east of Farmington) and that was the end of the project. The photo above is of the monument placed on the surface above the Project Gnome Site. 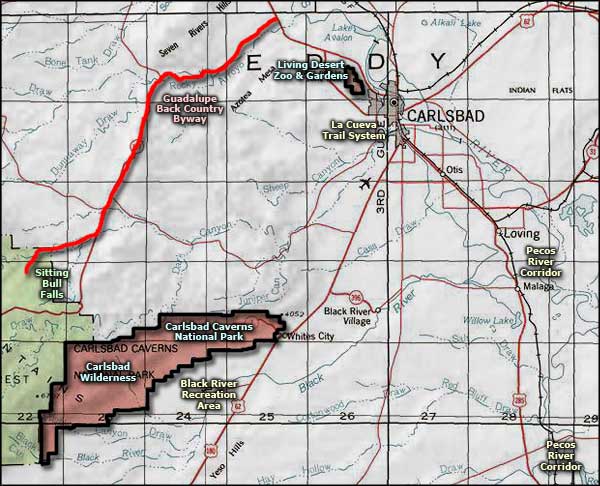