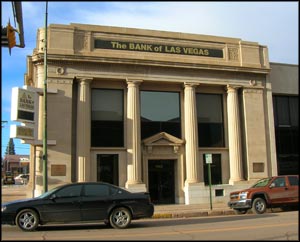 Las Vegas is another of the small towns from the old days, except in the old days, Las Vegas wasn't so small. In 1835, the town was established as a settlement to occupy a land grant from the Mexican government. It was laid out in traditional Spanish Colonial style: a central plaza surrounded by buildings that could be fortified to protect the folks inside in case of Indian attack.

The town prospered as a stop along the Santa Fe Trail. In 1846, Stephen Watts Kearny arrived with the Army of the West and gave a speech in the Las Vegas Plaza claiming New Mexico for the United States. In 1880, the Atchison, Topeka & Santa Fe Railroad arrived, promptly building a station about one mile east of the plaza and creating a rival "New Town." Because of the railroad and the location, Las Vegas quickly became one of the largest cities in the southwest. Also because of the railroad, New Town became a lawless refuge for folks like Doc Holliday and Big Nose Kate, Hoodoo Brown, the Durango Kid, Mysterious Dave Mather, Billy the Kid and Jesse James. Ralph Emerson Twitchell, the eminent historian, once said: "Without exception there was no town which harbored a more disreputable gang of desperadoes and outlaws than did Las Vegas."

By the early 1900's, Las Vegas had an electric street railway, the Duncan Opera House, a Harvey House hotel, a Carnegie Library and the New Mexico Normal School ( a teacher's college now known as New Mexico Highlands University (the third state university, after UNM in Albuquerque and NMSU in Las Cruces)).

Las Vegas is in a beautiful location about an hour east of Santa Fe and an hour-and-a-half south of Raton (via the I-25). Just looking around at the wealth of period architecture, you can see that this was once a larger, more vibrant and more prosperous city. A fair bit of the original architecture has survived but there isn't much new construction going on downtown. I'm fine with that because I like to see the older stuff get refurbed while still maintaining the look and ambience of what made Las Vegas what it once was. That gawdy, new, big city stuff just wouldn't be right here.

I took my first drive around Las Vegas back in 1988. I saw a nice, little, sleepy town on the boundary between the plains and the mountains. In 2007, the changes I saw in town were mostly from manifestations of the "Santa Fe effect": a lot of folks who've had enough of the glitz, glamour, hype, crowds, and ridiculous cost of living in Santa Fe were settling in the Las Vegas area, bringing their business and businesses with them, revitalizing the local economy in the process. Las Vegas is a mix of old and new New Mexico, and the old and new seem to be getting along quite fine.

Las Vegas is home to the New Mexico State Hospital (now the New Mexico Behavioral Institute). A few miles east of town is the Las Vegas National Wildlife Refuge, a great place to visit and spend a few hours when the mass avian migrations are happening in spring and fall along the Central Flyway. Just beyond the northwest edge of town is Montezuma, where there is a nice little public hot springs in the very front yard of the Armand Hammer United World College of the American West. The College itself is mostly housed in Montezuma Castle but there is a beautiful, adobe-construction International Peace and Meditation Pavilion on the grounds, too. Also north of town is Rociada, Pendaries Village & Golf Course and a huge domed chunk of granite sticking high up in the air named Hermit Peak. Due north is Storrie Lake State Park (a big windsurfing destination) and that road continues north through Mora and up over the Sangre de Cristo's toward Taos.

The Las Vegas Airport is about five miles northeast of town (although there are no commercial flights happening) and the AmTrak station in town is still in operation. Las Vegas also has a gorgeous, brand new hospital on the east side of town, just off the I-25. Every public school I came across is also of pretty recent construction (New Mexico is one of the few states left in America that puts more of the people's money into schools and education than into prisons). I also found city parks all over the place and nearly every one had an extensive new playground for the kids (jungle gyms, slides, monkey bars, swings, teeter-totters, etc.). Things are looking up for this slightly tarnished jewel of the Old West. 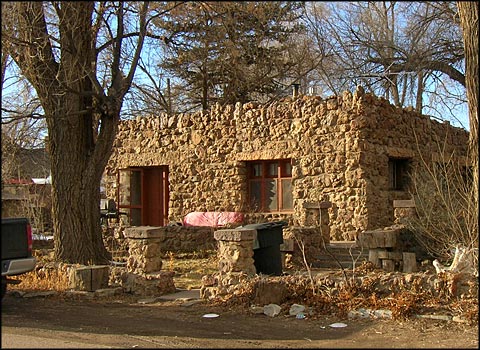