The countryside Hope is embedded in 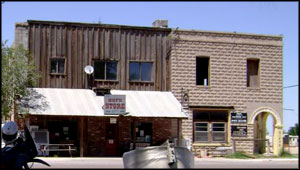 Hope was founded in 1884 with the name "Badgerville." The name was changed in 1890 at the behest of the US Postal Service.

Hope is the featured location of the first successful offensive by humans against the zombie horde in World War Z (a New York Times bestseller published in 2006 and made into a full-length feature film released in June, 2013).

Hope is located between Cloudcroft and Artesia on the plains east of the Sacramento Mountains. Pretty empty, flat, cactus-filled countryside, although the area seems to be a favorite among the folks who ride bicycles across America. I drove through Hope once while traveling with my nephews between Carlsbad and Alamogordo. It was a nasty, thunderstormy night and we ended up camping in some thick black dirt high in the Sacramentos. With all the action in the sky, I don't remember seeing Hope at all... but I still remember the mess we had next morning in that thick wet black muck.