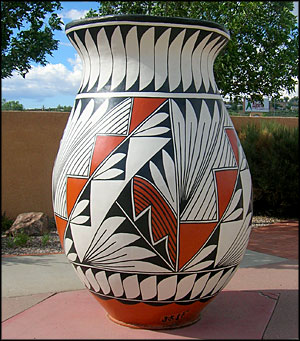 I've been passing through Gallup since I was a little boy and Route 66 was America's Main Street. The city has gotten significantly larger over the years but the character of it hasn't really seemed to change. It's a crossroads town and the nearest large city to the Navajo, Hopi and Zuni Reservations. Gallup is in the heart of some pretty spectacular countryside. There is a huge rodeo here every year that attracts professional "cowboy" talent from all over the planet. There are Native American arts and crafts on display and for sale everywhere in the city.

Gallup was named for David Gallup, a paymaster for the Atlantic & Pacific Railroad that founded the town in 1891 as a railhead. Over the years some mines were developed in the area but the last of them closed in the 1970's and 1980's. Gallup has a historic problem with lack of education, poverty, alcoholism and lack of economic development and opportunity. At the same time, Gallup has more millionaires per capita than any other city in the US. Some folks attribute this to exploitation of the local Native American arts and jewelry industries.

Gallup also has a long history of being in the forefront of the civil rights movement. The city opposed racial discrimination against its black residents as far back as the 1940's. During World War II, Gallup successfully prevented 800 Japanese-American residents from being rounded up and placed in internment camps. Starting in the 1970's, a sizable community of Palestinians has grown up in Gallup.

An interesting fact is that early in his career, Bob Dylan falsely claimed that he was raised in Gallup (he was actually born Robert Zimmerman in Duluth and was raised in Hibbing, both cities in northern Minnesota).