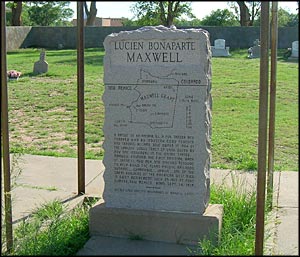 It was in 1866 that Oliver Loving and Charles Goodnight drove a herd of longhorn cattle to Fort Sumner from Texas to sell to the Army to feed the starving Navajos. That was the beginning of the Goodnight-Loving Trail, one of the first and most famous of all the western cattle drive trails.

This disaster perpetrated on the Navajos only lasted for a few years before they were allowed to return to their native countryside in northwestern New Mexico and northeastern Arizona (with some holdings in Utah). The Fort was decommissioned in 1868 and the buildings and site were sold to Lucien B. Maxwell (in 1870), who'd recently sold his Maxwell Land Grant to a group of Dutch and English investors. Maxwell lived here until he died in 1875.

William (Billy the Kid) Bonner didn't make history here until 1881 when Pat Garrett came sneaking into Pete Maxwell's house and shot and killed Billy in the dark. Billy was buried a few days later just a few yards from Lucien Maxwell's grave. But that's not the end of the Billy's grave saga. His tombstone was stolen in 1950. In 1976, Joe Bowlin found it in Granbury, Texas and it was returned to Fort Sumner. Then it was stolen again on February 8, 1981. It was found on February 12, 1981, in Huntington Beach, California. "Big John" McBride, sheriff of DeBaca County, flew out to Los Angeles and returned a couple days later with the gravestone. On May 30, 1981, the local Chamber of Commerce with Jarvis P. Garrett (Pat Garrett's youngest of 7 children) officially reset the marker inside the iron cage that has served to keep the wandering gravestone in place ever since.

The town of Fort Sumner originally grew out of settlements around the Maxwell-Beaubien property at Bosque Redondo. In 1907, the business center of Fort Sumner moved to its present site with the construction of the Belen cutoff of the Santa Fe Railroad and the Bosque Redondo area slowly returned to being the beautiful agricultural area it originally was.

In the 1920's Transcontinental Air Transport built an airfield near Fort Sumner, intent on building a coast-to-coast passenger network but that plan foundered on the rocks of the Great Depression. The Army Air Corps used the runways as part of a training base during World War II. After the war, the airfield was decommissioned from military use and became the Fort Sumner Municipal Airport. Then it was chosen as a launch site for the high altitude balloon program run by NASA. It is still the spring and fall home of the Columbia Scientific Balloon Facility.

The population of Fort Sumner is down almost 18% since 2000. Nearby attractions: Fort Sumner State Monument and Sumner Lake State Park.