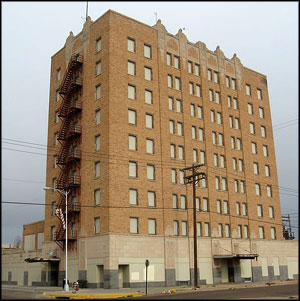 Clovis is named for the first Christian king of the Franks, supposedly because the daughter of the railroad stationmaster at the time of the town's naming was studying French and she proposed the name to replace the former appellation of "Riley's Switch," which was probably the railroaders' name for the track siding that grew into a settlement here on the Llano Estacado (the Staked Plains) in eastern New Mexico. The name was later transposed onto the Clovis culture, a significant early anthropological group that inhabited the area several thousand years ago.

The Clovis culture came on the historical scene in 1932 when Clovis native A. W. Anderson discovered the Blackwater Draw site with its "Clovis Points," just south of Clovis. Blackwater Draw is now a National Historic Landmark and has been researched by more than a dozen universities.

The Hotel Clovis (pictured to the left) opened its doors in 1931 as the tallest structure between Dallas, Texas and Albuquerque, New Mexico. For many years the hotel was supplied with patrons by the nearby Santa Fe Railroad depot. The Art Deco exterior hides a Southwestern Indian interior. Music legends Hank Williams, Tommy Dorsey, Louis Armstrong and Glen Miller played in the elegant ballroom. However, everything ground to a halt shortly after the Santa Fe Railroad discontinued passenger service to Clovis. Presently, the building is unused and often vandalized.

Clovis is in the heart of peanut and cotton farming and cattle ranching country. The area also produces a lot of dairy products. Integral to the economics of the area is Cannon Air Force Base, an installation that was slated to be closed until the DoD changed its mission to one of Special Operations training for all branches of the military.

Clovis is also famous as the home of the Norman Petty Recording Studios (NorVaJak Music, Inc.), the place where Buddy Holly & The Crickets recorded "That'll Be The Day" and "Peggy Sue," back in the 1950's. Roy Orbison also recorded here, along with Clovis' own Fireballs whose "Sugar Shack" reached #1 in 1963. 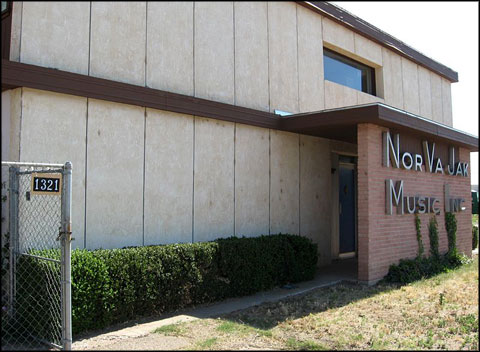