Fort Bayard, a US Army outpost, was established in 1866 to protect mining operations in the southern Gila's from marauding Apaches. The fort was built and manned by the Buffalo Soldiers of Company B of the 25th United States Colored Infantry Regiment. After Geronimo's capture in 1886, the fort was almost deactivated. However, the excellent health record of the installation served to get the property converted into an Army tuberculosis hospital and research center. The fort was transferred to the Surgeon General's Office in 1900, then to the Veteran's Administration in 1922. Active duty soldiers returned during World War II and German POWs were held at the fort from 1943 to 1945. Today, the fort hospital is the Fort Bayard Medical Center, administered by the New Mexico Department of Health as a long term nursing facility and a chemical dependency treatment center. Most of the property around the hospital is now listed on the National Register of Historic Places as the Fort Bayard Historic District.

When the Atchison, Topeka and Santa Fe Railroad built a line through here (on the way to the copper mine at Santa Rita), they established a depot known as "Bayard Station" close to a local homesteader's ranch house. That was about 1/2 mile from Fort Bayard itself and it served a long time as the supply terminal for the fort. Over the years since, the settlement of Bayard grew up around that siding. The population really grew after higher-grade copper ore was discovered beneath the company town at Santa Rita and those folks were told to move... These days, the administrative office of the Cobre Consolidated School District (serving Bayard, Hurley, Santa Clara and the surrounding area) is located in Bayard, as are the district high, middle and elementary schools. 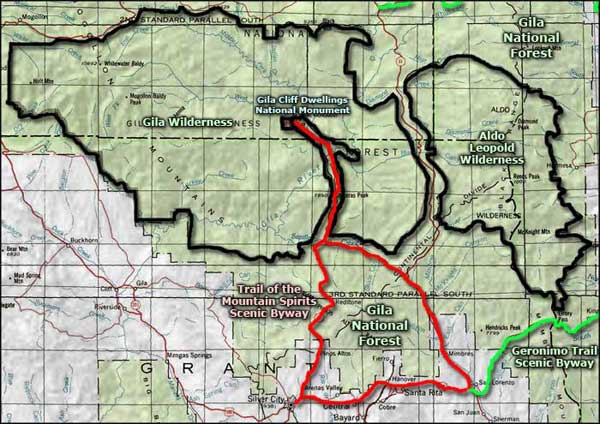