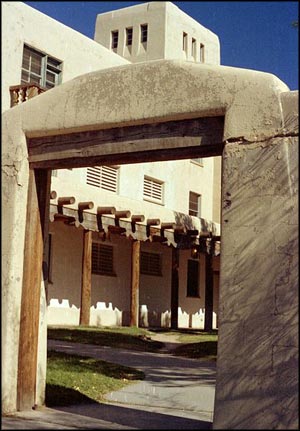 Albuquerque is the 34th largest city in the United States and the largest in New Mexico. In June of 2007, the US Census Bureau ranked Albuquerque as the 6th fastest growing city in America. Straddling the Rio Grande, the city's eastern edge laps up against the Sandia Mountains, Sandia Mountain Wilderness and Cibola National Forest.

Albuquerque is home to Kirtland Air Force Base, Sandia National Laboratory, Petroglyph National Monument, and the University of New Mexico.

Albuquerque was founded in 1706 as a farming community and military outpost along El Camino Real (a route that connected Chihuahua with Santa Fe, the northern capital of New Spain). The city was named Alburquerque in honor of Don Francisco Fernandez de la Cueva (also known as the "Duc de Alburquerque"). One story has it the name was changed by an early Anglo railroad station-master who couldn't pronounce the original spelling, so "Alburquerque" became "Albuquerque."

When Colonel Stephen Watts Kearny and his Army of the West took New Mexico in 1847 during the Mexican-American War, "Old Town" Albuquerque was just a typical small village in central New Mexico. During the Civil War, an advancing Confederate army occupied Albuquerque in February, 1862. After a few days rest, the Confederates advanced further north, past Santa Fe to Glorieta Pass where they were met and stopped by the Union Army and volunteers. In April, the Confederates passed through Albuquerque again on their retreat southward. A day-long, long range engagement happened on April 8, 1862 but few casualties were reported. Then the Confederates continued their retreat southward and eventually made it back to Texas.

The Atchison, Topeka & Santa Fe Railroad arrived in 1880. And as was "business as usual" with a railroad in those days, they set up shop about 2 miles east of Old Town, building railyards and a passenger depot in an area that quickly became known as "New Town." Also as usual in the case of new, large railheads, the crime rate went through the roof and the local officials hired well-known gunmen as law officers. New Albuquerque was incorporated as a town in 1885 and as a city in 1891. Old Town remained a separate community until it was absorbed by New Albuquerque in the 1920's.

By 1900, there were maybe 8,000 people living in the two Albuquerque's. The 2 towns were connected by an electric street railway that also extended to the recently established University of New Mexico campus on the East Mesa. The dry climate brought many tuberculosis patients to the area and that's part of what started St. Joseph Hospital and Presbyterian Hospital on their upward growth spirals (these are now 2 of the largest hospitals in America's Southwest).

Route 66, the primary Chicago-to-Los Angeles route ran through Albuquerque for many years, starting from 1926. The route was re-configured in 1937 so you may come across highway signs in the area denoting "Pre-1937 Route 66." Today, Route 66 is a designated National Historic and Scenic Byway. The first time I remember traveling Route 66 was in 1957, and Lomas Avenue (just a few blocks north of Central) in those days was a dirt road. Today, Lomas is 6-8 lanes wide for most of its journey across town. But in 1957, Route 66 crossed Albuquerque east-west as Central Avenue, and I remember miles and miles of motels, restaurants, stores and crowded sidewalks.

Albuquerque was rated the best city in America for business and careers by Forbes Magazine in 2006, and 13th best (out of 200 metro areas) in 2008.

One of Albuquerque's "icons" is the Albuquerque International Balloon Fiesta. This annual event began with 13 hot air balloons in 1972 and grew to a max of 1,000 balloons during one mass ascension in 2000. Since then, citing safety reasons, Balloon Fiesta officials allow only 700 registered balloons. The Balloon Fiesta is probably the most photographed human event on Earth.

Every April, Albuquerque hosts the Gathering of Nations Pow-Wow, an international gathering of more than 3,000 indigenous Native American singers and dancers from more than 500 tribes all across North America. The Bubonicon, one of the largest science fiction conventions in America, also happens every year in Albuquerque.

If you're visiting, you don't want to miss the Sandia Peak Tramway (the world's longest passenger tramway, connecting Albuquerque's Northeast Heights with the crest of the Sandia Mountains), the Albuquerque Biological Park, Petroglyph National Monument, the Rio Grande Zoo, and the Rio Grande Nature Center State Park and Bosque. The Sandia Wilderness, located just east of Tramway Boulevard on the east side of town, is probably the most highly trafficked wilderness area in the United States. 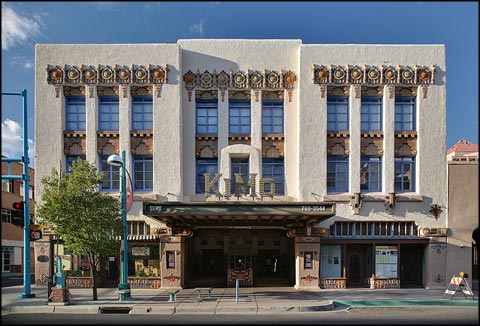 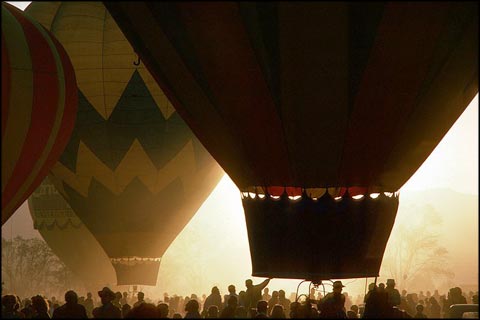