Abiquiu is an embodiment of New Mexico's claim to the term "Land of Enchantment." Large vistas filled with mesas and buttes of multi-colored sandstone formations are what this valley is made of. The Rio Chama flows through the center of the valley and was dammed in the mid 1960's to form Abiquiu Lake. The Abiquiu Land Grant is actually east of where these photos were taken and, while very fertile and sparsely populated, is not as striking as this area. In the middle of the highly colored rock zone is the Ghost Ranch, former home of Georgia O'Keefe and present-day conference center owned by the Presbyterian Church.

In the 1730's, Abiquiu was the 3rd largest settlement in New Mexico. Georgia O'Keefe lived (and painted) at Ghost Ranch from 1949 until she died in 1986. Other than the gorgeous countryside and Abiquiu Lake, the biggest tourist draw these days is the annual Abiquiu Studio Tour, conducted every year on the Columbus Day weekend.

Crossing Abiquiu Dam and heading southwest leads into Coyote and eventually to Cuba, on the western side of the Jemez Mountains. West of the Ghost Ranch, a Forest Service road heads south and then west toward the Rio Chama Wilderness, ending near the Monastery in the Desert. Just before exiting the valley on the way to Tierra Amarilla is the Echo Amphitheatre, a naturally eroded amphitheatre-like formation in the sandstone.

Looking at these photos (which can't possibly do Abiquiu justice), it's easy to see why this area is a major artists' mecca: imagine how these colors vary with the sun's position and with moving cloud cover. And under a full moon...

Hollywood is also aware of the unearthly beauty of the Abiquiu area. Cowboys & Aliens, Red Dawn, City Slickers, The Last Outlaw and Wyatt Earp showed lots of scenes shot in the Abiquiu countryside. Parts of the Abiquiu are also served as settings for the TV series Earth 2. The second unit crew of Indiana Jones and the Kingdom of the Crystal Skull filmed the series' usual opening shot of a mountain in the Abiquiu area. If only that mountain existed... the shot was really a close-up of a prairie dog mound surrounded by fantastic countryside.

Just south of the village of Abiquiu are the Poshuouinge Ruins, remains of a Tewa Pueblo built above the Chama River between 1375 and 1475 CE and abandoned around 1500 CE. At its height the pueblo consisted of about 700 ground floor rooms and rose to three stories in some areas. The city was laid out around two central plazas with a grand kiva near the center of the eastern plaza. Archaeologists figure the city was abandoned as the long-term drought worsened and the people relocated closer to the Rio Grande corridor where their descendants still live (Santa Clara and San Juan Pueblos). About all that marks the site now are some scattered building stones and potsherds. 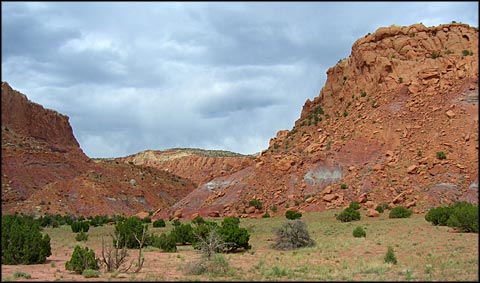 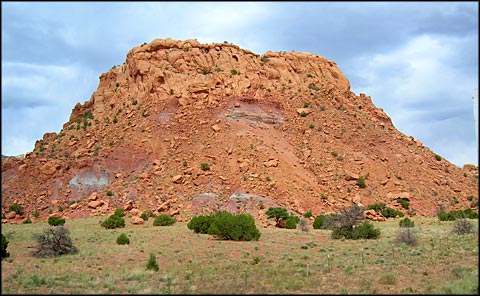