The site of the Bear River Massacre 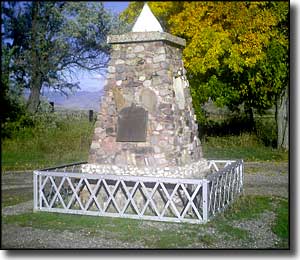 The monument at the Bear River Massacre site

A few miles northwest of Preston, Idaho on US Highway 91 you'll come to the site of the Bear River Massacre. In this place a winter encampment of Shoshones was attacked and butchered by the California Volunteers (a unit of the US Army based in Utah) on January 29, 1863. Estimates of Shoshone casualties run as high as 384, although the "official" Army version says closer to 250. Either way...

Congress declared the site a National Historic Landmark in 1990. The National Park Service renamed the site the "Massacre of Bear River" in 1993. The Shoshone Nation bought the site in March, 2008 and began developing a picnic/rest area and historic memorial on a hilltop just north of the site. What the Shoshone now own is 1,691 acres of wide open grassland with a few scattered trees and some low hills next to the US Highway.

This whole thing came about because there were so many white settlers coming into the area (and passing through on the Oregon and California Trails) that the Shoshone were pushed to the edge of starvation. Brigham Young had instructed the Mormon settlers to "feed them rather than fight them" and that had worked for a while to defuse hostilities. However, the pressures of population growth removed more and more wild game from the area and also slowly pushed the Shoshone onto land that was less and less suited for agricultural or food production purposes. The new, mostly white immigrants were simply eating the Shoshone out of house and home.

Jacob Forney, the Superintendent of Indian Affairs for Utah Territory at the time saw this and informed his superiors at the Department of the Interior of the growing problem as early as 1859. He suggested at least giving the Shoshone a reservation on workable land somewhere in the Cache Valley before shooting started and people began dying. He was ignored, then he was replaced.

His replacement, James Duane Doty, looked into the situation in early 1862 and found the Shoshone destitute and reduced to begging for food. They had also begun raiding nearby farms and cattle ranches for food to survive on. Doty bought some food supplies for them and began slowly handing it out but with the Civil War going on, his resources were limited. Further aggravating the situation was the presence of the 3rd California Volunteer Infantry Regiment in Utah. Col. Patrick Edward Connor was their commanding officer and he had been ordered to move his men to Utah with 2 primary objectives: 1.) Protect the Overland Mail Route, and 2.) Keep the peace in the region and keep Utah in the Union (after enduring years of religious persecution that eventually forced most Mormons out of the eastern states and into the Territory of Utah, the Federal Government didn't trust them to remain "loyal").

There were several incidents over the years, usually ending with a number of either dead immigrants or dead Shoshones. On December 4, 1862, a detachment of cavalry under Major Edward McGarry detained 4 Shoshone warriors as hostages and ordered the rest of the tribe to return several stolen cattle or the men would be shot. The very next day the warriors were executed and their bodies dumped into the Bear River when it was found that the Shoshone chiefs had moved their people further north in the Cache Valley. At that point the Deseret News published an editorial stating that this execution would only serve to aggravate the problem and lead to more killings. A few days later a freight hauler told the Deseret News that the Shoshone were intent on killing "every white man they should meet on the north side of the Bear River, till they should be fully avenged."

The final incident that led to the massacre involved a group of Montana-bound miners who got lost and ended up camped within 2 miles of the main Shoshone winter encampment on the Bear River near what is now Preston, Idaho. When the shooting started, one miner was killed along with several horses. The rest of the miners returned to Salt Lake City and one of them filed an affidavit with the court describing the incident. He further reported in that affidavit that the Shoshone had killed 10 other white miners 3 days before he arrived on the scene. Chief Justice John F. Kinney then issued a warrant for the arrest of Shoshone Chiefs Bear Hunter, Sagwitch and Sanpitch. He also ordered military involvement in the action. What's a bit funny in this is at the same time the warrant was being issued, Chief Sanpitch was in Salt Lake City trying to negotiate peace for the Northwestern Shoshone with the Mormon leaders. The Mormon leaders however, informed him that they'd had enough of the Shoshone and were backing the Army in their efforts.

At that point, Col. Connor and his "troops" were spoiling for a fight. There was a lot of resentment in the Army camp because the men felt they were being denied the "privilege" of traveling to the eastern states and killing Southern traitors. Connor made his plans and moved north with infantry, cavalry and artillery. All in all, his men carried 16,000 rounds of ammunition and nearly 200 rounds of artillery shot. They were also reasonably effective in their efforts to "sneak up" on the Shoshone at Bear River but by the time they arrived in that area, the weather was bad and the temperature was hovering around -20°F.

Major McGarry arrived on the scene with his cavalry about 6:00 AM. The infantry was having a hard time lining up because the snow was quite deep. The artillery never did make it to the site because it was stuck in snow drifts several miles away.

Connor started off with a direct frontal assault against the Shoshone but the tribe responded with heavy gunfire and the California Volunteers suffered nearly all their casualties in the first few minutes of the fight. The Volunteers were forced to retreat and regroup. Then Connor tried several flanking maneuvers but wasn't really getting anywhere until the Shoshone ran out of ammunition. Then the massacre began. Some of the warriors died with lead molds in their hands while they tried to make new bullets. Tomahawks and arrows were flying but the soldiers overwhelmed the camp and started killing everyone. After most of the men were dead, the soldiers turned to raping and killing the women. They were also shooting and killing the children, although some of the children were picked up by their feet and swung to bash their heads against anything hard the soldiers could find. Women who refused to submit to rape were simply shot and killed, then molested. No quarter was given and no prisoners taken in the complete loss of control and discipline. Many survivors were rounded up and shot with pistols at point blank range. Then the soldiers burned the camp to the ground, killing everyone they found still hiding in the dwelling structures.

In spite of all the carnage, some of the Shoshone survived. Chief Sagwitch was shot twice and tried to escape on a horse, only to have the horse killed beneath him. Eventually he ran down a ravine, fell into the Bear River near a hot spring and then hid out in the bushes until nightfall. His son, Beshup Timbimboo, was shot 7 times but survived by pretending to be dead. Others also survived by pretending to be dead or by somehow staying hidden in the willows along the Bear River. When it was all over, the California Volunteers had lost 27 soldiers, including 5 officers. The Shoshone dead were estimated at between 200 and 400, although one Mormon emigrant claimed to have walked among the bodies and counted 493 dead Shoshones.

This spelled the end of the Shoshone Nation's influence on events in the Cache Valley. Over the years, many of the Shoshone became baptized members of the LDS Church. Chief Sagwitch himself became an ordained Elder in the Melchizedek priesthood. Many survivors of the Bear River Massacre eventually settled in Washakie, Utah (named for a prominent Shoshone chief) and built homesteads and farms under LDS Church sponsorship. Most Shoshone who didn't move to the Washakie area went to the Fort Hall Indian Reservation in Idaho instead.

Col. Connor was shortly promoted to Brigadier General, then to Major General. For the next several years he was a major thorn in the side of the LDS Church as he dealt with accusations of harassment against non-Mormons and as he tried to establish a primarily non-Mormon mining industry in Utah. He also was involved in several campaigns in the western states against other Native American tribes, including a big one in Wyoming called the Powder River Expedition against the Sioux and Cheyenne (Red Cloud's War, which the Indians essentially won - although the treaty ending that conflict was repeatedly violated by Col. George Armstrong Custer and his 7th Cavalry... but that's another story).