An old mine site near Quartzsite, Arizona 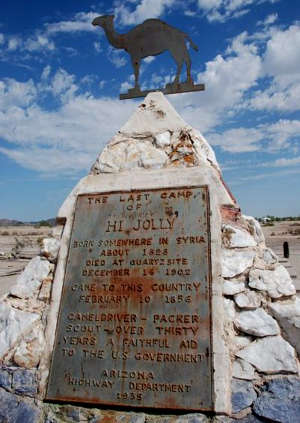 Quartzsite is a major "snowbird" destination on the I-10 in western Arizona. The area is heavy desert with a lot of old mine sites around. About 1.5 million visitors come to Quartzsite in January and February every year for 15 swap meets and 8 major gem & mineral shows.

Quartzsite is also the burial place of Hadji (Hi Jolly) Ali, a Greek-Syrian camel jockey who was a major player in the US Army experiments with using camels in the desert regions of the southwest back in the late 1800's.

The first settler in the area of Quartzsite was Charles Tyson. He built a fort here to protect his water supply from attacks by hostile natives. Shortly, Fort Tyson became a regular stopover on the Ehrenburg-to-Prescott stage route. When the stage stopped running, the site was abandoned.

Quartzsite itself came into existence in 1897 with a small mining boom that lasted into the 1960's. Then the Pow Wow Rock, Gem & Mineral Show began attracting rockhounds from all over North America in 1965. Now rockhounds, vendors and jewelers in thousands of RV's descend on Quartzsite every winter.

The population of Quartzsite is up almost 9% since 2000.