A view of Prescott Valley

Yavapai County tends to be very conservative, politically, and Prescott Valley is in the heart of that. Law enforcement has a very heavy hand here with red light cameras at virtually every stop light along Arizona Route 69, and several fixed-location speed cameras in between. The Prescott Valley Police Department also has several mini-vans that they park along the roads with mounted speed cameras on board. I say this because in terms of those statistics statewide, Prescott Valley is always at the top of the list, or very close to the top. I've driven through Prescott Valley several times in the last few years and AZ 69 looks like a road you can make some time on, except the road is basically one long strip mall with stop lights acting as dividers between one retail section and the next. Maybe I'm an Old West purist-type but Prescott Valley looked to me like one of those places built in beautiful countryside by a group of developers interested in getting the most profit out of it they could and letting someone else deal with "quality of life" issues after they'd junked up the countryside. I just wasn't impressed, but an awful lot of folks disagree with me on that one because the valley is getting quite built up. Anyway, when I drive through Prescott Valley, I'm headed for places that actually have some history to them, beyond those modern cookie-cutter subdivisions and the AnywhereUSA retail architecture that so much of modern Arizona is overrun with...

PS: No, I haven't yet had the honor of meeting with any members of Prescott Valley's Police Force in any official capacity. But I do (obviously) have a problem with towns that see the Big Brother approach to dealing with mass traffic as a potential "profit center"...

PPS: In doing research for this page I came across a bunch of stuff in moderated forums in regards to local political/business corruption (bankrupt developers and kickbacks to city politicians) and an interesting story about a former Aryan Nations leader from Washington State who was busted for drugs while working as a Yavapai County Sheriff's Deputy (reported in the Prescott Daily Courier, sometime in May, 2007). 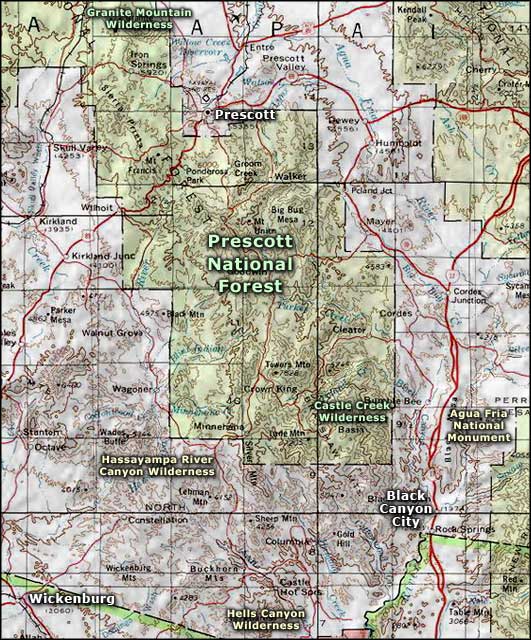