Pinetop-Lakeside is located in the heart of the White Mountains, in the largest stand of Ponderosa pines on Earth (that line was written before the fires of the last few years, of course). The towns are surrounded by the Apache-Sitgreaves National Forest and there are at least 57 natural fishing lakes in the area. The winter population of about 8,000 balloons in the summer to between 25,000 and 30,000. Pinetop-Lakeside sits at about 7,200' on the edge of the Mogollon Rim and the White Mountain Apache Reservation.

Archaeologists say the Apache first migrated into this area about 900 to 1000 years ago. The first Europeans came through in 1540, looking for gold with Coronado. In 1870, the US Army established an outpost at Camp Mogollon (later called Camp Apache, then Fort Apache). Corydon E. Cooley was hired on as an Indian scout and it was because of his efforts that the area was spared the problems of the Indian Wars. It helped, too, that he married two daughters of the White Mountain Apache Chief. When Cooley left the Army job, he moved up to what is now the Show Low Creek area and built a sawmill and a house and started ranching on the 100,000 acres that he and a partner had claimed back in 1870. It was in 1885 that John Williams Phipps arrived, Phipps being the first person to stake out a homestead in the Pinetop area.

Because alcohol was banned on the Apache Reservation, the Army troops stationed at Fort Apache had to leave the property to get a drink. The nearest saloon was at Phipps' place, and they had to climb the mountain to the top of the pines to get there. Walt Rigney ran the saloon for Phipps and had a distinctive head shape and hairdo: he looked like a pine tree. The soldiers named the place "Pinetop."

Lakeside is a name that was arrived at in 1906 by a group of Mormons who had just finished buying out all the other settlers in that area. The two settlements became "Pinetop-Lakeside" when they were finally incorporated as one town in 1984. These days, Pinetop-Lakeside is a booming summer resort area with motels, cabins, resorts and excellent restaurants scattered among the tall pines.

The population of Pinetop-Lakeside is up more than 20% since 2000. 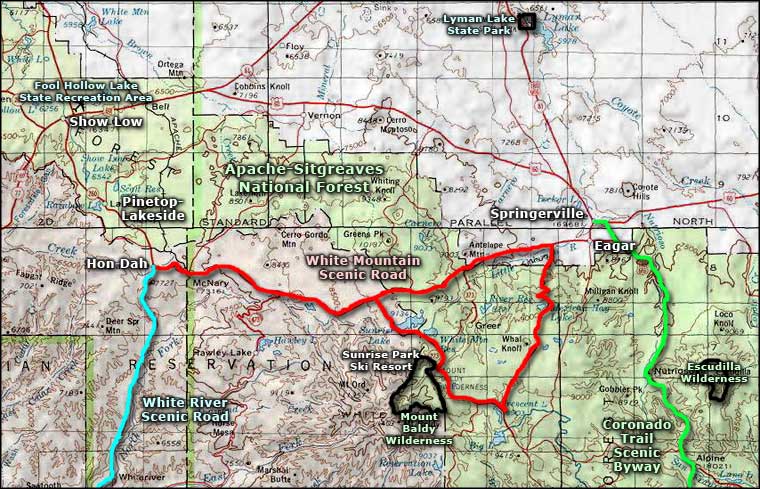