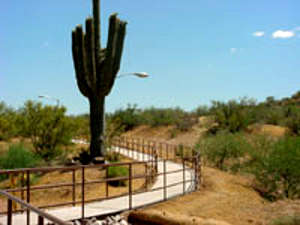 Mammoth was originally Mammoth Camp, built to service the nearby Mammoth Mine around 1883. The Mammoth Mine was a gold deposit found by Frank Schultz in the Galiuro Mountains east of the San Pedro River. The area around the Mammoth Mine was so rugged that a stamp mill couldn't be built close by to separate the gold ore from the rock. Mule teams and wagons were used to haul the ore down to the stamp mill in Mammoth until 1903 when a cable system was built that carried the ore down to Mammoth in buckets. On the return trip, the buckets carried water for the miners. In those days, Mammoth was a typical gold mining camp with outlaws, gunslingers, shady lawmen and soiled doves walking the streets. Apparently the gold ore ran out about 1905 and the mine shut down. In 1936, molybdenum was discovered in the mine tailings so a different type of mine operated in Mammoth for a few years, and then the mining stopped again.

In the 1950's, several large copper mines in less rugged countryside opened up, ran for a few years and then closed, the last one being the San Manuel open pit mine (which closed in 2003).

These days, Mammoth has transitioned from being a mining bedroom community to a town focused on services, tourism and light industry. East of Mammoth are the Galiuro Mountains and the Galiuro Wilderness. To the northeast is the famous Aravaipa Canyon Wilderness. To the west are the Black Hills and south is Oracle and the "back road" up onto Mt. Lemmon.

Also a few miles southwest of Mammoth is Biosphere 2, a completely enclosed 3-acre model of the Earth's ecosystem. The Biosphere was originally built as a completely sealed off and self-sufficient research center but shortly into the experiment, things went awry with the folks sealed inside. These days, Biosphere 2 is a teaching and learning center with on-going research into how the environment of the Earth is being affected by the presence (and industry) of modern humans. Tours of the Biosphere property are offered daily.